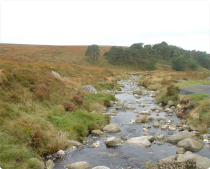 The source of the River Liffey near The Sally Gap in Wicklow, October 2005

The source of the River Liffey near The Sally Gap in Wicklow, October 2005

According to the latest report on Ireland's water quality (EPA, 2019), 3,192 rivers are monitored regularly in Ireland as part of the national river monitoring program. This monitoring looks at the chemical composition of the river water or else looks at the small animals that live on the river bed. Some of these animals are very sensitive to pollution and so their abundance gives a very good indication of what the water quality has been like in the past.

Over half (53%) of the monitored river water bodies in Ireland are at ‘good’ and ‘high’ ecological status while the remainder are at less than good (47%). The number of water bodies at bad ecological status has more than halved since 2007-2009. This is because serious pollution from industrial and urban wastewater has been addressed. However, there is still plenty of work to be done.

The most economically developed parts of the country (east and north-east) are the most affected by water quality issues.