Burning of fossil fuels such as coal is a major factor in air pollution. The sale of bituminous (smoky) coal was banned in parts of Ireland in the early 1990's in an effort to address this issue. 'Winter smog' was a growing problem in urban areas at the time, due to the widespread use of bituminous coal, and this, in turn, had given rise to serious health effects in the population.

In the Dublin area the marketing, sale and distribution of bituminous coal was prohibited. Smoke and sulphur dioxide (SO2) levels showed considerable improvement once the ban was introduced and the policy was gradually rolled out over several other large towns and cities. The ban on bituminous coal was introduced under the Air Pollution Act 1987 and a number of amendments to the 1998 Regulations allowed this ban to be extended to other areas.

A ban on the burning of smoky coal and other prohibited fuels now applies in all smoky coal ban Low Smoke Zones (LSZs) to complement the ban on the marketing, sale and distribution. Specifically, the ban took effect in Dublin from 1990. However, under Smoky Coal Ban Regulations 2012-2020 the ban now applies to all towns with populations over 10,000 people. This ban directly benefits the health of a large majority of the Irish population. An interactive map of current locations where LSZs apply can be found here (see image below also). A nationwide Low Smoke Zone (LSZ) is expected to be introduced in the coming years however to improve air quality and human health for the entire population.

A Voluntary Agreement between The Department of the Environment, Community and Local Government and the Solid Fuel Trade Group Ltd (SFTG) was first agreed in 2002. This set a limit of sulphur content of bituminous coal to no more than 0.7% and Regulations in 2011 placed this limit on a statutory footing. This measure somewhat helped to reduce the impacts of air pollution on human health and the environment, particularly in the winter months.

In order to support its effective implementation, all coal bagging operators and fuel suppliers for the residential market must register with the EPA. They must also maintain a record of their product showing that it is compliant with the Regulations. Fines are also in place for anybody that breaches these Regulations under the Environment (Miscellaneous Provisions) Act 2011.

The ban on smoky coal has greatly reduced levels of Particulate Matter (PM10) in major towns and cities. Dense black smoke decreased significantly in Dublin after the ban in 1990, in Cork in 1995 and in Limerick 1998. Overall, a 70% reduction in the average smoke levels in winter in Dublin has been achieved since October 1990, indicating the level of success that the ban has had.

More specifically, the original ban in Dublin is cited widely as a successful policy measure both nationally and internationally as best practice within the international clean air community. It is estimated that approximately 8,000 premature deaths have been averted in Dublin alone since the introduction of the smoky coal ban in 1990. Further health, environmental and economic benefits (estimated at €53m per year) are expected, when the ban is extended nationwide. 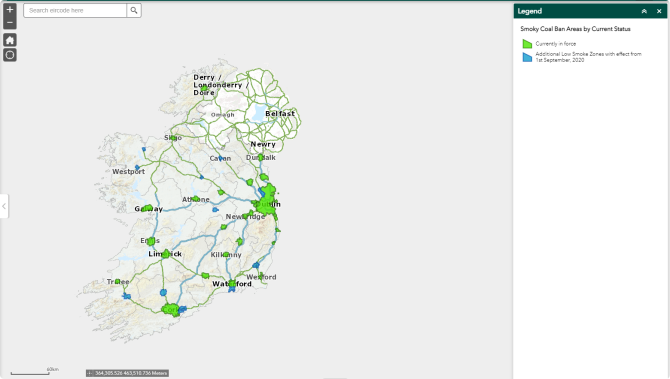