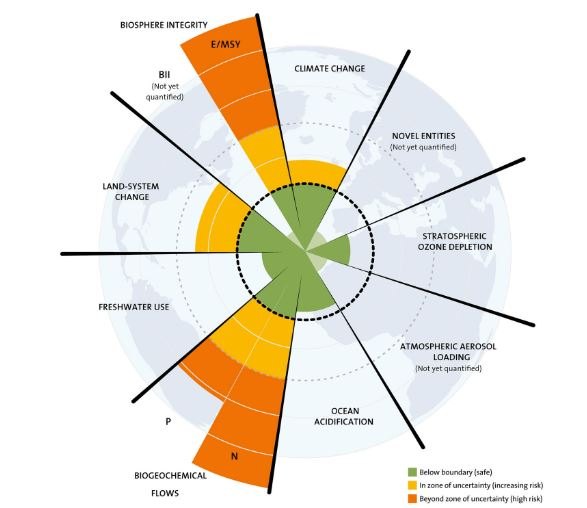 Nine Planetary Boundaries have been defined with specific tipping points including: climate change, the rate of biodiversity loss, altered biogeochemical cycles, stratospheric ozone depletion, ocean acidification, global freshwater use, change in land use, chemical pollution, and atmospheric aerosol loading (Rockström et al., 2009). All Planetary Boundaries are systematically interlinked, meaning that if a boundary crosses its threshold it can generate feedback loops that may trigger other boundaries in crossing their threshold e.g. land use change may indirectly affect climate change processes through activity that results in the sequestration of carbon.

Transgression of these boundaries would take the planet away from the current Holocene-like state (where environmental processes up until relatively recently occured naturally), meaning that the human species would no longer be able to thrive or develop. According to scientists, four of the nine boundaries have already surpassed their thresholds (highlighted in orange and yellow in the diagram above). These include: climate change, loss of biosphere integrity, land-system change and altered biogeochemical cycles (Rockström et al., 2009; Steffen et al., 2015).