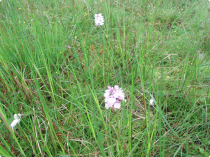 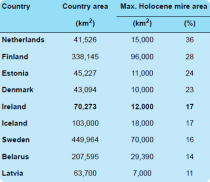 Bogs as a proportion of total land area

Bogs as a proportion of total land area

In Ireland, peatlands create distinct upland and lowland landscapes; for example, the character of the west of Ireland is largely determined by extensive cover of blanket bogs. These vast expanses of bogs in certain parts of Counties Galway and Mayo might look species poor, but they contribute considerably to international landscape biodiversity. Due to its location at the western edge of Europe, Ireland, together with the UK, represents the heartland of the world blanket bog resource. Therefore, Ireland has a clear international responsibility for the conservation of such landscape biodiversity.

Irish peatlands come in various shapes and forms, representing a unique range of habitats from calcareous-rich fens to acidic bogs, many of them being identified as ‘priority’ habitats under the Habitats Directive (EC Directive on the Conservation of Habitats, Flora and Fauna 92/43/EEC) because they are particularly threatened in Europe.

Peatlands host a diversity of species and life forms. The floral and faunal species found on peatlands represent a considerable resource within the biodiversity of Ireland, some of them being endemic and rare at a global scale. Life forms on peatlands are of great interest because of the necessary adaptation to such harsh environmental conditions, e.g. the peatforming Sphagnum mosses, and the carnivorous plants such as sundew (Drosera spp.), bladderwort (Utricularia spp.) and butterwort (Pinguicula spp.). The range of animals and birds that use peatlands for feeding, breeding and refuge is considerable. Peatlands support few but unusual and rare species with exceptional adaptation and more species have yet to be discovered (EPA, 2011).