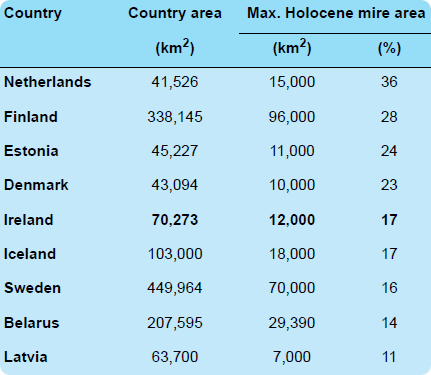 Bogs as a proportion of total land area
Courtesy EPA ©

Peatlands are estimated to have covered a total area of 1.17 million ha or 17% of the area of the Republic of Ireland at the end of the last ice age, approximately 11,700 years ago. This original area (also called maximum Holocene presence) corresponds to a high percentage cover enjoyed by other countries in Europe (see image).

Over the last 11,700 years however, much of this area has been extensively modified by humans. Peat has been used in Ireland since prehistoric times, but since the advent of industrial peat extraction, the process has accelerated and within a few decades most of the larger raised bogs in the Irish Midlands will have been exploited. In 1979, it was estimated that around 56% of the original area of bogs was still ‘unmodified’. However, all Irish peatlands to date have been affected by peat cutting, grazing or fire to one extent or another. To date, nine out of Irelands 11 peatland habitats listed under the EU directives are in bad condition, with another stated as inadequate and only one habitat in good condition, according to the National Parks and Wildlife service.

The National Peatland Strategy was introduced in 2015 as a pathway for the management of peatlands and regulation setting around further turf cutting. Given Irish bogs' national and international significance, several national organisations and charities actively work to preserve Irish peatlands by campaigning for their protecting at national and international levels. These include the Irish Peatland Conservation Council and An Taisce (The National Trust for Ireland).

See the subsections beneath for an overview of these bog types.