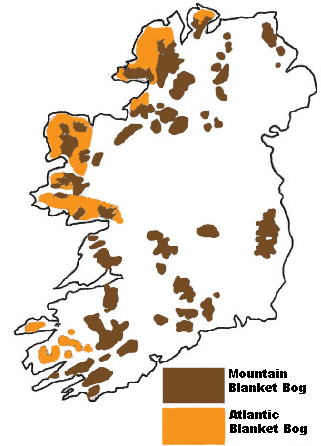 Although raised bogs are at particular risk in Ireland, blanket bogs are rarer ecosystems internationally. Blanket bogs are restricted to oceanic areas of constant high rainfall and no distinctly dry summer period. Globally, they cover 10 million ha and can only be found in Norway, Newfoundland, Alaska, Kamchatka, Japan, Tierra del Fuego, the Falkland Islands, Tasmania, New Zealand, Britain and Ireland and in mountains of some other countries.

Ireland has the largest coverage of blanket bogs in Europe (original cover was estimated at 773,860 ha – two-thirds of the original peatland cover in Ireland) and these bogs are distinctive landscape features of the western coastline and mountainous areas.

Blanket bogs developed about 4,000 years ago but some are currently being created. They are most widespread in areas where both the rainfall is greater than 1,250 mm and the number of rain days exceeds 225 annually. Like raised bogs, blanket bogs are rain fed. Natural blanket bogs are dominated by Eriophorum species, black bog rush (Schoenus nigricans L.) (only low-level Atlantic blanket bog), purple moor-grass, lousewort, bell heather, the bryophytes Campylopus atrovirens and Pleurozia purpurea. These species also occur in raised bogs, but generally only around the edges, where ecological conditions resemble those typical of blanket bogs. The peat in a blanket bog is generally very dense and highly decomposed throughout the peat profile, resulting in a very slow downward movement of water through the peat (EPA, 2011).

In 2016 the Irish Peatland Coservation Council (IPCC) set up a Blanket Bog Camapaign to raise awareness and implement policy around the protection of blanket bogs. The IPCC claimed that turbary, mechanical cutting, overgrazing, land reclamation, burning and forestry have resulted in the loss of 72% of the original area of blanket bog in Ireland (IPCC, 2016).