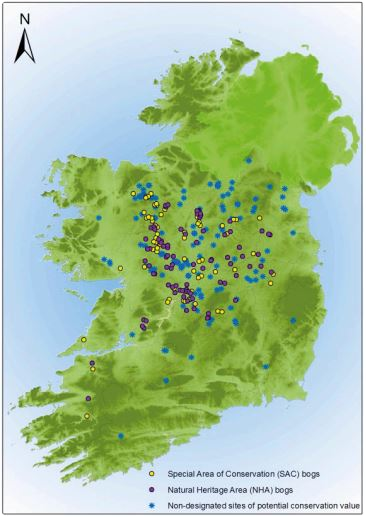 Ireland was originally home to 908,117 ha of blanket bog before a range of human led practices left the peatland landscape seriously depleted. The Irish Peatland Conservation Council (IPCC) conducted an assessment of the conservation status of Irish peatlands which was then published in Ireland’s Peatland Conservation Action Plan 2020 – Halting the Loss of Peatland Biodiversity (IPCC, 2009). Findings from the IPCC 2009 Assessments demonstrated the extent to which peatlands in Ireland have been damaged, with only 28% of blanket resources remaining in a relatively intact status. A further 36% of blanket bog was reported as being lost from turf cutting practices that still have a serious impact on bogs today through industrial peat extraction (IPCC, n.d.). 28% of Ireland's landscape, originally home to blanket bogs, have also been lost due to large scale afforestation schemes. Overgrazing from sheep and invasive alien species were also listed as conservation threats to our native bogs (IPCC, n.d.).

A range of rewetting and restoration schemes are being practised across the country. This work is aided by 98 recorded sites that have been restored to some degree and monitored by the IPCC, many of which still operate to facilitate peat production.

Previous - The Future of Irish Bogs
Next - Disturbances to Peatlands