The Importance of Planning, and Abiding by the Plan

Spatial planning is carried out under the Planning and Development Act 2000 and is rooted in the principle that decisions about development should be based on the common good rather than the interests of private individuals alone. Sustainable development is that which "meets the needs of the present without compromising the ability of future generations to meet their own needs" (Our Common Future, the Brundtland Commission, 1987). With this in mind, it is essential that all building plans in urban and rural areas take the environmental impact of the developments into consideration. 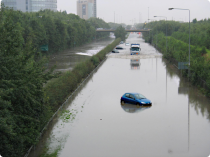 Flooding on the N3

The extensive flooding that affected much of the country in August 2008 damaged roads and much local infrastructure. This section of the N3 which runs from Dublin to Cavan was impassable during the downpours.

Flooding on the N3

The extensive flooding that affected much of the country in August 2008 damaged roads and much local infrastructure. This section of the N3 which runs from Dublin to Cavan was impassable during the downpours.

Galway during the floods in 2009

Galway during the floods in 2009

One of the most important aspects of planning in Ireland is to take into consideration the future impacts that development may have; for example, the probability that flooding might occur. Building on flood plains or not putting in preventative measures can cause a huge amount of damage to homes and businesses. For example, in July 2013 Donegal's new A&E unit was damaged extensively by flooding. It was attributed to the absence of proper flood attenuation measures at the nearby river, which burst its banks after a heavy thunderstorm.

Ireland experienced one of the worst incidences of flooding in November-December 2009, especially in the west and south of the country. This was the result of prolonged and intense rainfall that was almost four times the average for the time of the year. Huge numbers of people were forced to leave their homes and businesses over the Christmas period due to floodwater damage.

Since 2015, Met Éireann and the UK Met Office have named storms, some of which have caused serious damage, including Desmond (4-6 December 2015) Frank (29-30 December 2015) and Dennis (15th-17th February 2020). Hurricane Ophelia (16th October 2017) was regarded as one of the worst storms to affect Ireland in over 50 years with winds reaching up to 156 km per hour in parts of the country. Both Met Éireann and the UK Met Office now work with the Dutch National Weather Service (KNMI) in naming storms annually to ensure consistency across each country. The latest storm names can be viewed on the Met Eireann website here.

The principle of the planning system in Ireland is that local authorities make decisions on development proposals that are put forward by individuals and public organisations. Such decisions, in the form of planning permissions, are made in the context of planning policies that have been adopted by the local authority as well as national policy documents and regulations such as the National Spatial Strategy (NSS) and regional planning guidelines (e.g. wind energy, rural housing, housing density etc.). In addition, development proposals must comply with Environmental Impact regulations, and plans and programmes with the Strategic Environmental Assessment regulations (SEA). More recently, new buildings must also comply with the Building Energy Rating regulations (BER). With regards to historical buildings, the Heritage Council's role is to propose policies for the protection, preservation and enhancement of historical monuments and architectural objects.

In relation to the development and maintenance of drainage systems, the Office of Public Works (OPW) work to ensure compliance of drainage operations with EC regulations. They have set out an approach to manage the requirement for environmental assessments in their series of Ecological Assessments which consider how specific areas of conservation may be affected by drainage operations. The first Ecological Assessment report in the series examines the impacts of arterial drainage maintenance operations on Natura 2000 sites. Approximately thirty assessments are carried out every year for arterial drainage operations in Natura sites in fulfilment with the requirements of the Habitats Directive. More information on the OPW's environmental activities and assessments can be found here.