Unsustainable development occurs when present progress is at the expense of future generations. For example, irresponsible planning and environmental degradation through exploitation of resources generates waste and pollution that damages ecosystems. Such practices are not sustainable in the long term. 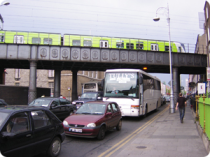 Many people travel long distances to work in urban areas, wither by commuter trains, buses or by car.

Many people travel long distances to work in urban areas, wither by commuter trains, buses or by car.

Many cities and commuter towns around the world face pressures such as waste management, transportation, urban sprawl, fresh air supply, clean water supply and access to green areas. This may mean that the long term sustainability of the town or city is at risk. Commuting is an example. While Dublin is a small city, it still faces some of the symptoms of an unsustainable city. Since the economy began to grow in the 1990s, much of the infrastructure around Dublin came under pressure. This created an unsustainable level of commuting from satellite towns in Louth, Meath, Kildare, Wicklow and even further afield. Long distance commuting by car is regarded as unsustainable because of energy consumption, traffic congestion and deterioration in the quality of life for those concerned.

Ireland has one of the highest levels of greenhouse gas emissions per capita in the EU, which is partly a result of the high level of commuting to Dublin and other major cities and towns around the country. Urban sprawl is very evident in Dublin. The city boundary is extending on all sides, with parts of Co. Meath and Co. Kildare now considered part of the Greater Dublin Area.