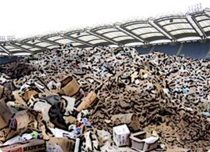 Croke Park as a rubbish dump

In 2006, city residents globally generated 680 million tonnes of solid waste a year according to the World Bank. By 2016, this figure had risen to 2.01 billion tonnes, and is forecast to rise to 3.40 billion tonnes by 2050. The cost of disposing of this waste is projected to rise from US$205bn to US$375bn a year over the next decade. Technology is often heralded as a way of dealing with increasing waste management problems globally. Using technology, there are several ways to improve recycling rates and reduce waste:

With RFID tag on waste bins and an RFID reader on waste collection trucks, a city/town can determine where and when pickups are being done — there's an electronic record of the truck's route, along with a time stamp and geospatial stamp. If using RFID on recycling bins, you can track participation rates and know who recycled, how many recyclables are in the load and how many homes the items came from, thus giving information on how many recyclables there are per household. This information can help city/town planners/managers see what demographics are participating in recycling programs. In areas where participation is low, the city can formulate incentive programs.

Studies conducted at a European level as well as by the Environmental Protection Agency have concluded that Pay by Weight encourages positive behaviour towards the environment as householders are encouraged to separate more waste and prevent waste where possible. General waste typically incurs a higher price per kilo, while there is usually a lower price for organic food waste, and no/a minimal charge for recycling waste. This practice has largely been adopted by waste collection providers in Ireland as of 2020 following the phasing out of 'all-in flat rate' charging for household waste.

Much of the world's waste goes to landfill sites, which amplifies pollution because it produces methane - a greenhouse gas and significant cause of climate change. But technology is helping to extract methane and turn it into electricity. For example, methane conversion at landfill sites in the Netherlands can produce between 250 kilowatts and 1 megawatt of electricity.

Methane breaks down in the atmosphere into water and carbon dioxide, a reaction that typically takes 10-20 years and slowly releases energy. But by injecting landfill methane into a container kept at ideal pressure and temperature conditions, this can be reduced from 20 years to 1-1.5 seconds. This process yields heat to boil water and power a steam turbine for generating electricity.

Using near infrared sorting technology to sort plastic materials from torn up vehicles is also an effective technological solution to managing waste. High-speed scanners above a moving conveyor belt can identify the infrared signature of an individual plastic particle within a hundredth of a second. These can then be sorted automatically and recycled accordingly.

Less than 20% of electronic waste (e.g. phones, laptops, TVs) is currently recycled or reused, and the amount being produced is growing quickly. Much of this waste ends up in landfills throughout the world where workers can become ill from the toxins, such as lead, mercury, and arsenic found in mobile phones and other gadgets.

Researchers are now working on electronic circuit boards that can dissolve in water to minimise the health impacts to individuals. Circuit boards within these devices are generally 1mm thick, but only the surface is used to transport charge. So a circuit board of 100 nanometres - roughly a hair's breadth - can do the same job, but takes much less time to dissolve in a landfill site.