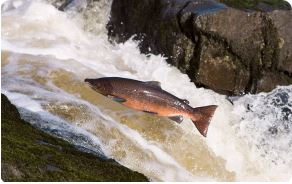 According to Inland Fisheries Ireland (IFI), rising temperatures in Irish lakes and rivers in the summer of 2018 resulted in lethal levels for fish species. Cold water fish species such as salmon and trout thrive under a temperature threshold of below 20 degrees. Recordings for the summer of 2018 exceeded this threshold. Such prolonged events can lead to an increase in fish mortality rates and pose a significant threat to cold water fish species in Ireland under current climate scenario models of increasing temperatures over the next 30 years.

Eutrophication occurs when increased temperatures are combined with increased nutrient loads (phosphorus and nitrogen loads from agricultural practices) in freshwater lakes leading to excessive plant growth, such as algal blooms that can have a negative effect on biodiversity. A recent global survey of freshwater lakes showed that algal blooms are increasing and becoming more widespread requiring a further look at future water management strategies as water supplies may be potentially threatened. The Slender Naid (Najas flexilis), in the figure below, is a plant that grows in Irelands clear water lowland lakes.This species is threatened by enrichment (eutrophication), acidification and peatland damage (NPWS, 2019).