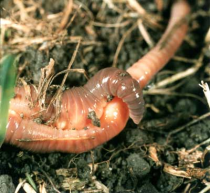 Earthworms are small, wriggly creatures that you are sure to find in every garden in Ireland. Despite this, they are nocturnal animals so you are unlikely to see one during the day. The sunlight makes them too hot and they prefer the cold and damp of the underground.

Earthworms are quite different to other bugs and beasties you might find. They have no eyes or ears, and they are a type of invertebrate. This means that they have no backbone. They have no legs either, but instead their bodies are divided up into about 250 different segments that come one after the other. This is why earthworms have to move along the ground on their bellies! 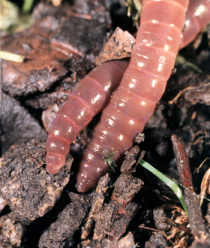 Earthworms spend most of their day burrowing underground through the soil, making miles of mini tunnels all through the earth. They are made up of 70-95% water, which must be very helpful as it allows them to squeeze through really tiny holes without getting stuck.

Along their travels, earthworms eat soil and any dead plants they find. Then they leave small rings of soil up on the earth, which are called worm casts. These are full of nutrients and help make the earth fertile.

All of the little passages that earthworms make through the ground are very important in keeping the earth healthy. They allow air into the soil and they act as drains for the water.

Did you know that over three million earthworms live in one acre of grassland and that they can make 5,000 km of tunnels in the soil every year?