The 1800s saw the development of further transport links into and out of Cork. Steam ships began to come in and out of Cork Harbour, while railways were built from Dublin to Cork and from Cork to Passage West and Bandon during the 1850s.

In Cork city itself, department stores, food shops, coffee shops, and other kinds of businesses opened on St Patrick's Street so that it became the busiest street in Cork and the heart of the city. 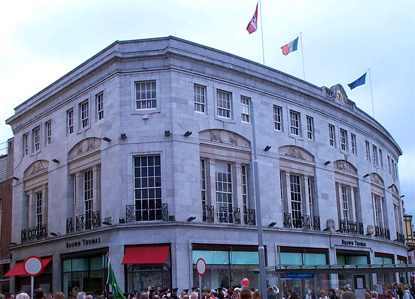 This image is of the Brown Thomas department store in Cork. The Cash & Co. department store used to be located in this building. Throughout much of the twentieth century, this would have been one of the busiest stores in Cork.

Advertisements from old trade directories give lots of information about the businesses of this time, and often even show illustrations of the buildings.

The quiz below asks you questions on adverts for different historic Cork shops. You have to figure out from the adverts what kind of goods are for sale in each of the shops. Use the scroll-bar along the side to scroll down the screen to view all the image and to continue on to the next question once correctly answered.