The Gordon Bennett Race of 1903 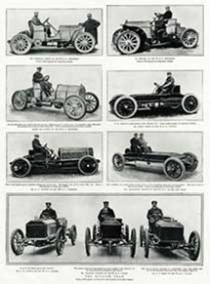 The Gordon Bennett Cup was an annual auto race which was held in various countries throughout Europe, starting in France in 1900. It is seen as the first step on the road to what we now call Formula One. The location for the race was chosen as a result of what nationality won the previous year's race. For example, when the British Empire won the cup in 1902, the following year's race was held in Ireland (because racing was illegal on British public roads) in what was the biggest sporting event to ever take place here up to that time.

This particular race caught the public's imagination in Ireland as over 1,500 people brought their cars over by boat to view this 2-week road racing extravaganza. As the total number of cars in Ireland was only around 300 at the time this was a hugely important event and provided many Irish people with their first opportunity to see a motor car.

Four countries entered teams of three cars each for the contest: France, the United States, Germany and Britain. The cars were painted in national colours - France in blue; the United States in red; Germany in white and Britain, as an appreciation of Ireland's role in organising the race, chose emerald green.

The contestants were asked to complete a figure-of-eight course with a total distance of 524 kilometres (327.5 miles) and the eventual winner was Camille Janatzy from Belgium, who drove for the German team.

The importance of this event to the people of Ireland can be seen by the fact that over 2,300 policemen were drafted in to help marshal the race. It also made Irish people more aware of the motor car as a mode of transport. The original route of the race between counties Laois, Kildare and Carlow is now a major tourist attraction in its own right.