The manner in which artists have been trained has had a significant influence on how Irish art has developed, in particular over the last three centuries since the foundation of specific art schools.

Up until the eighteenth century most artists, whether fine metalworkers, sculptors, painters or scribes would have trained through a system of apprenticeship, and it is likely that, in many cases, skills would have passed down through families. From the fifteenth century separate craft guilds developed, mainly in the larger urban centres such as Dublin, Cork and Galway. Guilds were responsible for the regulation of apprenticeship, the quantity and quality of goods which their members produced and for establishing wages and prices. The exclusive rights given to guild members to practise and trade within the boundaries of a town or city probably led to the regional characteristics detectible in, for example seventeenth-century silverware.

A more formal system of education for artists was established in Ireland in the eighteenth century. This was mainly in order to meet the needs of the aristocracy wishing to enhance their properties. The system of education followed the example of the Royal Academies in London and Paris. Students concentrated first on drawing and had to be proficient in that before they were introduced to the techniques of painting. Teaching placed a strong emphasis on the emulation of earlier art; students learned to draw figures working from plaster casts of antique sculpture – as the most perfect and beautiful exemplars – as well as from live models, and were encouraged to copy from prints and drawings, in order to learn from the established masters. The principal school was the Dublin Society Schools, which was the forefather of the current National College of Art and Design. It initially concentrated on drawing, and on various ornamental skills, and has always had a strong design element in its curriculum. 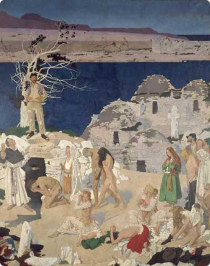 In the nineteenth century, the Royal Hibernian Academy was founded, essentially to ensure academic standards in art, and to supplement education in fine art painting. Academic painting required highly finished, illusionistic scenes, where the impression of a real space created in the image would not be undermined by the visibility of brushstrokes on the surface. The system gave most status to ‘history painting’ (paintings depicting scenes from mythology and religion), with portrait painting, landscape, genre (scenes of everyday life) and still life, roughly in that order, seen as more lowly.

In the late nineteenth century, the academic system was increasingly challenged in Europe as Modernist ideas began to take hold, and there was resistance to the level of control held by the art establishment over both education and the exhibition of art. This challenge occurred somewhat later in Ireland where traditional methods continued to be taught well into the twentieth century by prominent figures like Sir William Orpen, and later, by Seán Keating and Maurice MacGonigal. By the late 1960s however, a wave of student protests forced change, and new approaches to teaching art gave far less technical direction on one hand, but greater freedom of individual expression on the other.

Previous - Art in Ireland
Next - Themes in Irish Art