Despite being an island, it is a misconception to think of Irish art in insular terms.   The country’s relatively small scale, political, trade and migration history, together with proximity to Britain and Europe, have ensured a continuous cultural exchange between Ireland and elsewhere. The desire of artists and patrons to respond to new ideas and to look beyond the confines of their own borders has been a recurring factor, along with a historical concern to be part of the mainstream of cultural enlightenment. 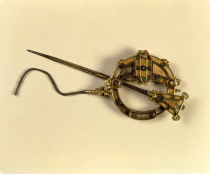 Courtesy of the National Museum of Ireland
Enlarge image

At the same time, there has been a concerted effort at various times in the history of Irish art to develop a recognisable national visual culture, often involving a return to the past, to recover lost traditions identified as typical and authentically Irish. For example, the antiquarian interests of the nineteenth century, and in the decades around Irish independence. The issues are especially relevant today as migration has prompted a re-examination of the concept of Irishness in a multi-cultural society, operating in a globalised world, and there is a consequent recognition of identity as evolving rather than static.