Believed to have come from mainland Europe, the Celts were a small band of warriors who made their mark by bringing new skills and tools made from iron that brought about many changes to Ireland. Their legacy can be witnessed through their standing stone carvings with intricate designs which still exist today.

This period saw the emergence of monasteries across Ireland inhabited by monks who dedicated their lives to God through fasting and prayer. They also spent time creating elaborate versions of the bible including The Book of Kells. Christianity is believed to have been brought to Ireland by slaves from England. It is also believed Saint Patrick successfully converted the Irish from Paganism to Christianity.

The Vikings are believed to have hailed from Norway. They invaded Ireland and interrupted the relatively tranquil era of Irish Christianity. They raided monasteries along the coastline and eventually made their way inland stealing treasure in a barbaric fashion. They were skilled craftsmen and were experts at boat making, metal work and blacksmithing. They were feared by many, setting up fortified encampments and long ports along Ireland’s coast. The Vikings were usually buried with jewellery, tools, weapons, household goods and sometimes boats.

Dermot MacMurrough (died 1 May 1171) was the King of Leinster. Ousted as King of Leinster, he invited King Henry II of England to assist him in regaining the throne. The subsequent invasion led to Henry becoming Lord of Ireland himself, and marked the beginning of eight centuries of English dominance.

Dermot MacMurrough (died 1 May 1171) was the King of Leinster. Ousted as King of Leinster, he invited King Henry II of England to assist him in regaining the throne. The subsequent invasion led to Henry becoming Lord of Ireland himself, and marked the beginning of eight centuries of English dominance.

The Norman invasion happened in two parts. The first occurred when the Norman knights landed in Wexford at the request of Diarmuid MacMurrough to ensure his position as King of Leinster. The second happened sometime later when a larger army invaded Waterford, taking over parts of Ireland and reinforcing the preceding army force. Henry II of England gained authority during this time when the union between Strongbow and Diarmuid’s daughter caused concern of a formation of a rival Norman state which prompted Henry II to visit Ireland and establish his authority. The Normans enforced a feudal system and transformed the church. They built their own monasteries and erected large cathedrals and castles.

This period saw the need for England to keep control of Ireland by confiscating land from Irish Chieftains and allocating it to landlords and settlers from Scotland and England to set up colonies in the Northern part of the Island. The colonisation of the province of Ulster was to primarily prevent rebellion. The settlers were required to be English speaking and as a result saw the decline of the Irish language. This had a dramatic and lasting effect on the religious and political nature in the area.

The battle for supremacy between protestant King William of Orange and catholic King James II was finally settled on the River Boyne, near Drogheda in 1690 and Aughrim in 1691. The battle was won by King William. The aftermath drove some of the defeated Irish leaders and followers (The Wild Geese) to pursue careers in Europe. The Protestants of The Established Church now controlled laws and exploited political power, discriminating against Catholics and affecting landownership.

Catholic Ireland struggled to be free of English rule and with the formation of the Orange, saw tensions rising and an increase of sectarian violence during this time to protect Protestantism in Ireland. The Orange was an organisation that derived from followers of Protestant William Orange that was closely linked to Unionism and established to protect Protestantism in Ireland. This called for reform and the English government created The Act of Union in 1800. This Act saw the abolishment of the Irish government and a full parliamentary union between Ireland and England. It basically represented a refusal to give the Irish parliament more freedom and instead of emancipating Ireland saw England making all their political decisions. The Act was a liability instead of an asset and created much conflict.

The worst years of The Great Famine lasted between 1845-1849.The wholesale failure of potato crops saw Ireland’s population drop from eight million to six million due emigration and loss of life from disease and starvation. Ireland had a number of political, social and economic concerns running parallel with the famine however, had lasting political repercussions which called for a desire for Ireland to self-govern.

Home Rule was an Act provided by the parliament of the United Kingdom for Ireland to be self-governed (Home Ruled) and proposed that Ireland to be established as a devolved state. The outbreak of the First World War postponed its enactment and the Act imaged for Home Rule was not granted until 1922 to what was now known as the Irish Free State.

The 1916 rising was an attempt to establish Ireland as a republic and end British rule over Ireland. The fighting lasted for a week. Eventually Patrick Pearce, one of the instigators, gave orders for an unconditional surrender to stop further casualties of Irish citizens. Those who were responsible for launching the uprising were secretly executed. Once these executions came to light a wave of nationalism swept the country and a call for Ireland to become a republic became a focal point to the Irish people.

A treaty was signed on 6 December 1922 that concluded the Irish War of Independence and finally saw Ireland as an autonomous state, free from English rule. The south of Ireland was now comprised of twenty six counties and known as the Irish Free State. Northern Ireland comprises of six counties, was now governed by the English. 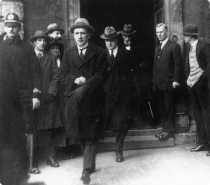 On 16 January 1922, the last Lord Lieutenant of Ireland, Lord Fitzalan, received the cabinet members of the provisional government of the Irish Free State to hand over power to them in the name of the British government. Kevin O'Higgins is pictured leaving Dublin Castle with Michael Collins and Eamon Duggan.

On 16 January 1922, the last Lord Lieutenant of Ireland, Lord Fitzalan, received the cabinet members of the provisional government of the Irish Free State to hand over power to them in the name of the British government. Kevin O'Higgins is pictured leaving Dublin Castle with Michael Collins and Eamon Duggan.

After Ireland gained independence in 1922 the government of the new state was led by W.T. Cosgrove of Cumann na nGaedheal which later became the Finé Gael Party. During the 1930s the Fianna Fáil party was established and headed by Eamon de Valera [commas] which dominated Irish politics. During this time the institutions of the state merged and a tradition of political stability was established.

The Constitution of Ireland was voted by Irish people and passed in 1937. In the Irish language it is known as 'Bunreacht na hÉireann’which means ‘Basic Law of Ireland’. It is a detailed legal document which declares Ireland (Éire) as a sovereign state and sets out to embody characteristics of a republic.

This Act was established by the Oireachtas (Irish parliament) that sets out the Irish State as a republic and appoints the President of Ireland to exercise authority over the state. It saw the termination of any constitutional role of the British monarchy and ending membership of the British Commonwealth.

Ireland on the International front
1955: Ireland was admitted in the United Nations
1973: Ireland joined the European Economic Community which is now the European Union.
1998: The Good Friday Agreement was signed in Northern Ireland.
2002: The Euro coins and banknotes entered circulation 1 January 2002 taking over the Irish pound.
Back to