Under the first Kyoto Protocol, Ireland committed to restrict greenhouse gas emissions growth to an increase of 13% over the 1990 baseline levels within the 2008-2012 period. During the second Kyoto Protocol commitment period, Parties, including Ireland, committed to reduce GHG emissions by at least 18 percent below 1990 levels in the eight-year period from 2013 to 2020.

The graph below shows Ireland's progress to our Kyoto target, indicating that we suceeded in the first commitment period. It is estimated that Ireland will meet its second commitment period Kyoto Protocol target through the use of Kyoto Protocol credits already purchased by the State, and use of unused allowances in the New Entrant Set Aside under the EU Emissions Trading Scheme (EPA, 2014). 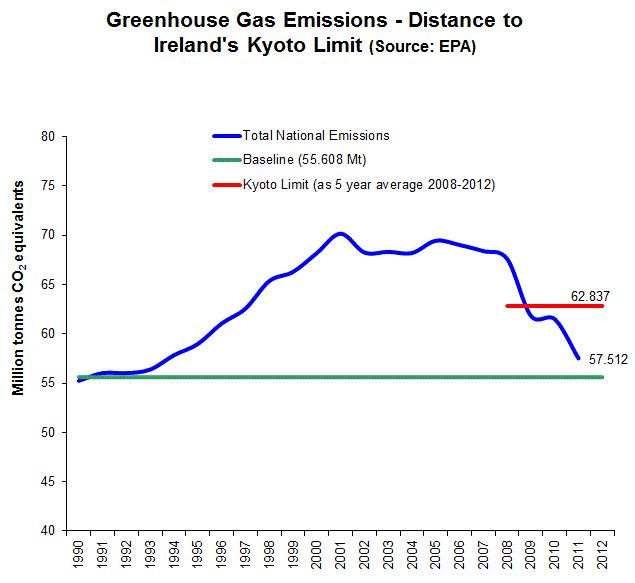 In 2007 the Department of Environment Heritage and Local Government published the second National Climate Change Strategy  outlining the key objectives for reductions in greenhouse gases across the energy, transport, industrial, agriculture, forestry and built environment sectors between 2007 and 2012.

In 2012 the National Climate Change Adaptation Framework was launched, providing a strategic policy focus to ensure adaptation measures are taken across different sectors and levels of government to reduce Ireland's vulnerability to the negative impacts of climate change. This was bolstered by the Climate Change Bill 2013, whose aim is to ensure that the State's net carbon account for the year 2050 is at least 80% lower than the 1990 baseline.

Partnership between government departments, business, industry and the community is required if Ireland is to achieve these goals.