Our Planet
© Department of the Environment, Community and Local Government

Global climate change is the biggest environmental problem that mankind has ever had to address.This is because, if it is not addressed, it has the potential to make this planet a very uncomfortable place for humans to live on and could lead to severe flooding, food shortages, shortage of drinking water and extreme weather events that will affect everyone.

See the separate section on climate change for more information.

The international community, through the United Nations, agreed a Convention to tackle the problem and later strengthened that convention with a Protocol that was negotiated in Kyoto, Japan whereby developed countries undertook to limit their emissions of greenhouse gases. As a result of that Kyoto Protocol Ireland undertook to limit its emissions to an annual average of 62.8 million tonnes over the period 2008-2012. 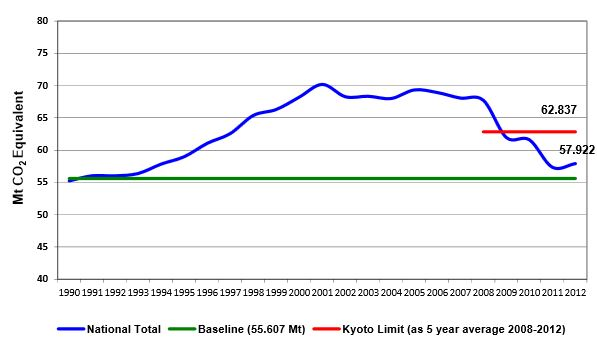 The graph shows the trend in emissions from Ireland since 1990 and indicates that for 2012 national emissions were reasonably below our Kyoto Protocol limit. However, per capita, Ireland's emissions are very high when compared to countries such as China and India.

Challenges for the Future

All of the recent measurements and observations indicate that the reductions agreed in Kyoto are not nearly enough to limit global climate change and so international negotiations are now taking place to agree much larger reductions.  The EU has already committed to a reduction of 20% below 2005 levels and undertook a 30% reduction if other countries agree to play their part.  These commitments would require Ireland to reduce greenhouse gas emissions to 54.7 or 48 million tonnes by 2020 depending on the final agreement.

The 2020 target will only be a stepping stone towards even deeper cuts by 2050 and so we will all be required to be less dependent on fossil fuels and to modify how we live our lives if we are to meet the challenge that climate change poses. Meeting our international obligations to address global climate change is the biggest environmental challenge facing the country.