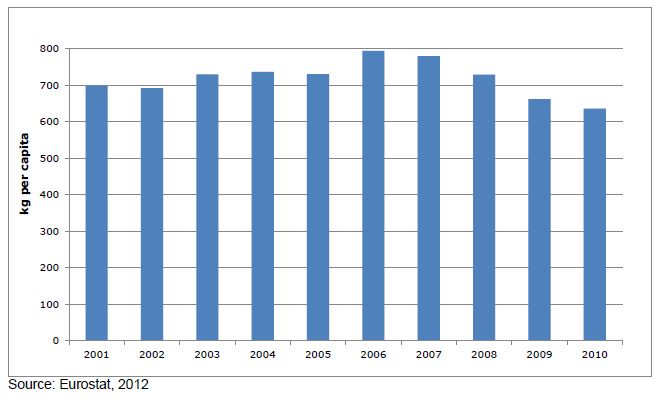 A high proportion of the waste that goes to landfill is made up of biological material such as food and garden waste and paper that rots in the landfill to produce a highly polluting liquid and very smelly landfill gas. The liquid, known as leachate, can pollute groundwater and surface water if not handled carefully and the gas can cause an odour problem for those living nearby. The EU has placed legal restrictions on the amount of this waste that can be landfilled with three progressive deadlines in 2010, 2013 and 2016. In recent years, Ireland has made significant progress in meeting these diversion targets, although the 2013 and 2016 Landfill Directive targets are at risk of not being met without considerable policy effort (EEA, 2013). Ireland is currently 250,000 tonnes in excess of the 2013 limit of 610,000 tonnes biodegradable waste disposed to landfill, and 433,000 tonnes from the 2016 target of 427,000 tonnes (EPA, 2012).

On a positive note, recycling has had a beneficial effect on municipal waste, as the chart below indicates. If Ireland maintains the trend for municipal waste recycling set in the period 2006 - 2010, it is set to meet its EU target by 2020. 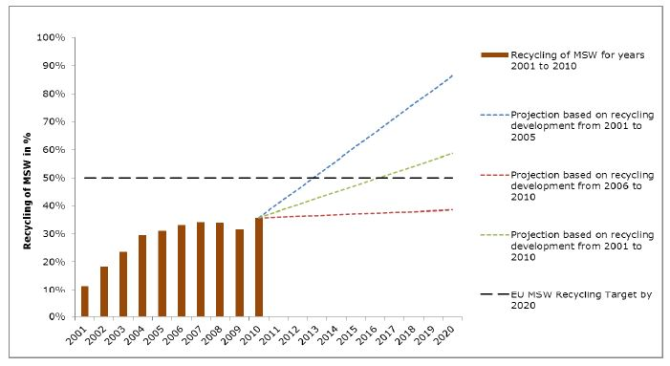 Previous - Municipal Waste Quantities
Next - Other Types of Waste