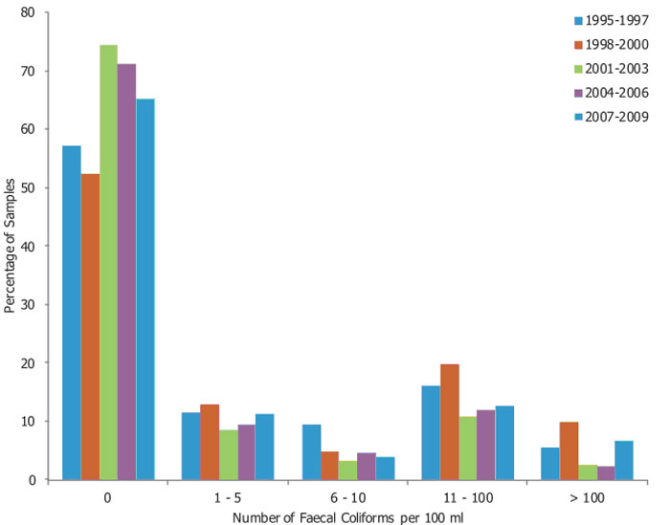 This graph shows the faecal coliform count in groundwater samples taken in five different survey periods from 1995 – 2009.  The presence of faecal coliforms indicates contamination by faecal matter and suggests the possible presence of more dangerous pathogens.

The faecal coliform limit for drinking water is zero.  For the most recent survey period 2007-2009, faecal contamination was found in 74.4% of the locations surveyed on one or more occasion.  This very high percentage confirms the vulnerability of our groundwater resources and underlines the importance of careful siting of septic tanks and careful management and spreading of animal manures. 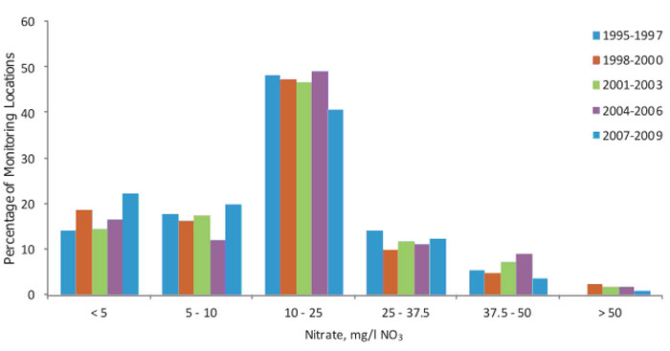 The graph shows the nitrate concentrations in groundwater for five different survey periods from 1995 – 2009.  The limit set by regulation for nitrate in drinking water is 50 milligrams per litre but the EU Directive also set a guide value of 25 milligrams per litre as an indicator of contamination.

The graph shows that a small number of samples exceeded the 50 limit but a large number breached the guide value.  Nitrate contamination is more common in the South and Southeast of the country where farming is more intensive.