River pollution in Ireland is caused by discharges from municipal sewage treatment plants, runoff from urban streets, septic tanks, landfills and from agriculture.  Forestry and industry also contribute to river pollution to a lesser extent.  Most of the seriously polluted stretches are affected by sewage discharges but these are mostly in small rivers that can be remediated through the upgrading of the sewage treatment facilities.

Oxygen is a gas that does not dissolve very well in water and, at 5oC, saturation with oxygen is reached at 13 parts per million in rivers and lakes.  All aquatic life depends on oxygen for survival and so anything that reduces the oxygen level can have a serious effect on the flora and fauna of the river.

When organic waste is discharged to a river the bacterial breakdown of that material in the river uses up dissolved oxygen.  Similarly green plant material absorbs oxygen from the water during the hours of darkness.   If too much oxygen is removed in those ways then fish will die and this happens regularly in Irish rivers. 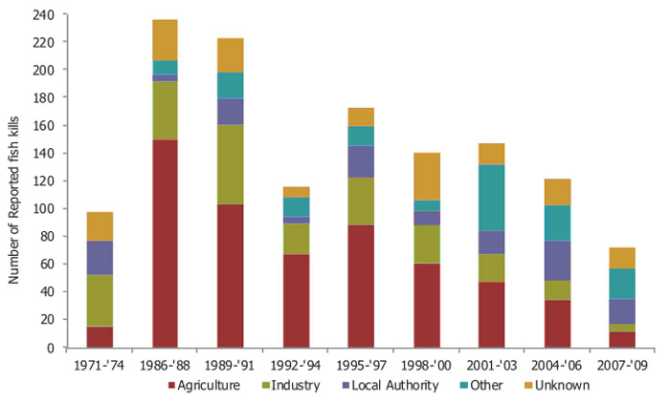 The graph above shows the number of fish kills in Irish rivers for the years 2007 – 2009. Data for several previous three-year periods and for 1971 – 1974 is included to indicate trends. While there has been a reduction in recent years compared to the 1980s, there continues to be a persistent problem, with 72 fish kills recorded from 2007 - 2009. 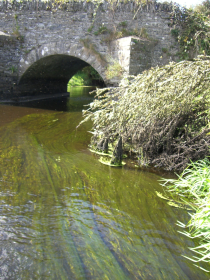 Eutrophication is a term used to describe the overabundant growth of green plant material in water.  It is caused by excessive nutrients reaching the water and these nutrients are Nitrogen and Phosphorus.  These two chemicals are contained in municipal waste water discharges and are also lost in runoff from land when used as fertiliser in agriculture.

The green material prevents sunlight getting through the water column and also uses up vital oxygen during the hours of darkness.  Eutrophication continues to be a significant problem in Irish rivers.

Some chemicals, such as heavy metals and organo-chlorine pesticides and herbicides, do not decay in the environment but can accumulate in the food chain leading to dangerous levels in higher life forms.

Fortunately Ireland does not have a large chemical industry and has a small percentage of land devoted to tillage. Consequently levels of these dangerous substances are low in Irish rivers although there is some such pollution downstream of abandoned mine sites.