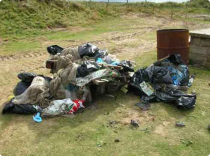 Rubbish near a beach, Co. Donegal

The Environmental Protection Agency, along with local authorities, can enforce fines for illegal dumping.

Rubbish near a beach, Co. Donegal

The Environmental Protection Agency, along with local authorities, can enforce fines for illegal dumping.

The Environmental Protection Agency (EPA) through the Office of Environmental Enforcement (OEE) enforces and supervises regional and national waste issues. Regular checks by the OEE ensure a constant flow of information from both the Government agency and local authorities. They also have the power to sanction legally binding instructions and prosecutions.

The EPA formed an enforcement network to provide higher and more regulated standards of management. Illegal dumping and unauthorised waste movement are the priorities. There are a number of waste issues that need constant monitoring;

An example is Cork County Council’s novel approach to intelligence gathering - with a helicopter  - which identified sixty unauthorised facilities. Enforcement has already led to the closure of fifteen illegal scrap yards. The remaining forty-five facilities are at various stages of compliance with legal requirements.

You can also play a part by using the illegal dumping phone line.This twenty-four hour call service is a means for the public to report people who illegally dump waste. A review has indicated that 70% of calls are resolved.  Approximately 75% of calls received relate to incidents of fly tipping and burning of waste. In its first year of operation (June 2006 to June 2007) Dublin had received 522 complaints which puts it in the top three counties along with Wicklow (349) and Cork (266). The total number of calls received was 2184.

Members of the public can report pollution or illegal dumping via a 24 hour lo-call telephone number 1850 365 121. More information can be found on the EPA's website.