Dr John Joyce is currently the Communications Manager at the Marine Institute, and co-ordinates the ‘Explorers’ marine outreach and education programme for schools. In 1978 he was presented with the Glaxo EU Fellowship for Science Writers by Taoiseach Mr. Jack Lynch T.D. for a series of articles on marine life in the magazine Diving Ireland. A published author and keen cartoonist, John is the creator of the Captain Cockle series of marine adventure books for children, as well as the ‘Virtual Trilogy’ of techno-thrillers Virtually Maria, A Matter of Time and Yesterday, Today & Tomorrow. His cartoon page of facts about the sea - Captain Cockle’s Log – is a regular feature in the environmental newspaper Sherkin Comment.

Ireland’s ocean environment covers 90% of our country’s territory. This is because Ireland has rights to over 220 million acres of designated Irish Continental Shelf which is ten times greater than the size of the island of Ireland.

This area – which is popularly known as “The Real Map of Ireland” provides a significant portion of the European Union’s Marine Exclusive Economic Zone (EEZ), which extends out across the Atlantic Ocean and includes parts of the Irish and Celtic Seas. 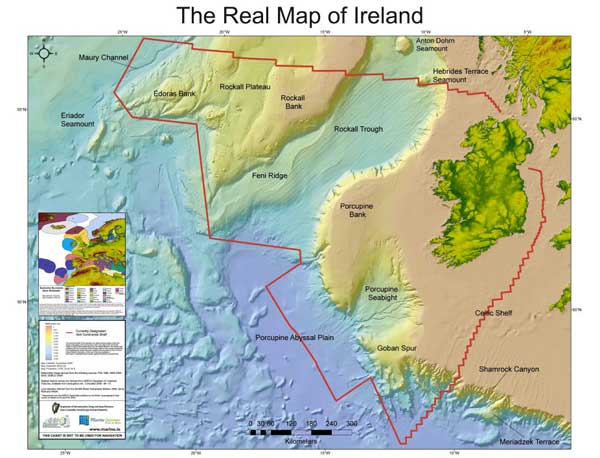 The deep water sections of the above map were made using information from powerful three-dimensional echo-sounders and other marine surveying equipment employed on the Irish National Seabed Survey (INSS), which began in 1999 and lasted for six years. This survey remains one of the largest seabed mapping projects ever undertaken in the world and produced over 300 paper-based charts and some 5.5 Terabytes of digital information.

It shows that the island of Ireland rests upon a shallow water plateau called the Continental Shelf, which drops away rapidly at around 1,500 metres down steep underwater cliffs and canyons to the Porcupine Abyssal Plain, some 5,500 metres below the surface of the sea. To the south west of Ireland, the Continental Shelf is deeply indented by the Porcupine Seabight and, to the North West across the Rockall Trough, the Rockall Bank rises steeply towards the surface.

Closer to the shore, information from the INFOMAR inshore seabed survey, was used to chart the bays and inlets around Ireland.   INFOMAR uses both echo-sounders and airborne laser surveying equipment to map shallow water areas in great detail.

Both of these survey projects were joint ventures between the Marine Institute and the Geological Survey of Ireland (GSI), working together with the Department of Communications and Natural Resources and other partners.

Under international maritime law the Exclusive Economic Zone of any country extends to a distance of 200 nautical miles (370 km) out from its coast, except where such boundaries are closer to a neighbouring country. Any country with an EEZ has special rights over the exploration and use of resources within that maritime area. The Marine Institute’s role is to harness marine research, technology, development and innovation in the support of industry in the sustainable development of this vital national resource.

Ireland depends on the oceans and seas within its EEZ for food, bio-discovery, renewable and petroleum-based energy resources, transport, and marine leisure activities. It is therefore essential that the seabed within that zone is accurately mapped and the habitats it contains are identified and catalogued.

Ocean scientists are also developing an understanding of the effects and influence of ocean currents on climate change, currents which can be influenced by the nature of the seabed below them.