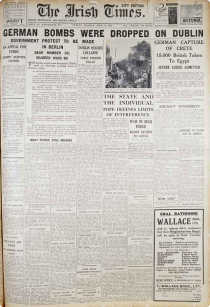 The decade of the 1940s was dominated by the Second World War (1939-1945) and the reconstruction of Europe under the Marshall Plan. The United Nations was set up with the aim of preventing future global conflicts. The post-war period also saw the start of the Cold War between the Soviet Union (USSR) and the West.

In Ireland the Emergency (Ireland remaining neutral and emergency powers in force) lasted throughout the war, and the second half of the decade saw attempts at post-war development. Ireland was declared a Republic in 1949. 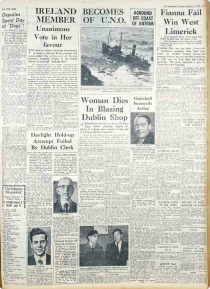 In Europe the 1950s were characterised by post-war reconstruction. The Cold War continued, and Eastern Europe was dominated by the Soviet Union, which crushed the Hungarian uprising of 1956. The Korean War (1950-1953) was fought between Soviet-backed North Korea and American-backed South Korea. The 1950s also saw the birth of a new kind of music which had far-reaching influence, Rock 'n Roll.

In Ireland the 1950s were marked by economic stagnation and emigration. Ireland was admitted to the United Nations, sending the first Irish UN soldiers to serve in Lebanon in 1958. Dr Noel Browne, as Minister for Health, began a campaign to eradicate tuberculosis, which was completely successful. Dr Walton of Trinity College Dublin, with Sir John Cockcroft, won the Nobel Prize for Physics, for their breakthrough in splitting the atom. Ireland began to participate fully in world cultural programmes, initiating such international events as the Wexford International Opera Festival in 1951, Cork International Choral and Folk Dance Festival in 1954, Cork International Film Festival in 1956, Dublin International Theatre Festival in 1957, and the setting up of Ardmore Film Studios in 1958.