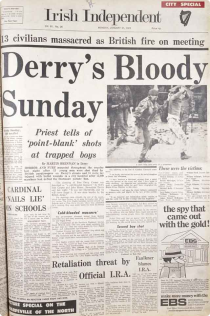 In 1972 the Vietnam War officially ended. In 1972 – 'Black September' – the massacre of the Israeli athletics team took place at the Munich Olympics. In 1974 United States President Richard Nixon resigned following the Watergate scandal. The late 1970s were marked by major global economic recession, resulting from the oil crises of 1973 and 1979, which followed the defeat of Arab forces in the 'Yom Kippur' war of 1973. In 1979 the Soviet Union invaded Afghanistan. In Europe radical groups, Baader Meinhof (in Germany), Red Brigade (in Italy) and ETA (in Spain), carried out urban guerrilla campaigns.

The decade in Ireland was dominated by the conflict in Northern Ireland, and the growth of the Provisional IRA. Ireland joined the European Economic Community (EEC) in 1973.

1973 (1 January) Ireland becomes a member of the European Economic Community (referendum to join 10 May 1972).

1974 (17 May) Dublin and Monaghan bombings in which 25 people were killed and over 100 injured in Dublin and 6 killed in Monaghan.

1975 (1 January) Ireland assumed Presidency of the EEC for the first time. The first meeting was held in Dublin on 10 and 11 March.