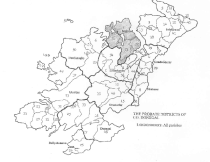 Map showing the way in which Donegal was divided up into Poor Law Unions. Milford Union has been shaded in.

Map showing the way in which Donegal was divided up into Poor Law Unions. Milford Union has been shaded in.

County Donegal is situated in the North West corner of Ireland, on the western edge of Ulster. In the late 1830s and 1840s the county as a whole tended to be slightly poorer than the rest of Ulster but slightly better off than Connacht. The percentage of fourth class housing in Donegal was less than that of the west coast and it also had a greater mix of religious denominations than that of the other western counties.

As the Irish language came under threat from anglicisation and modernisation it retreated further west into the less accessible parts of Donegal while the eastern parts of the county became largely English speaking.

Under the 1838 Poor Relief (Ireland) Act, Donegal was divided into eight poor law unions - Ballyshannon, Donegal, Dunfanaghy, Glenties, Inishowen, Letterkenny, Milford and Stranorlar. Milford Union, which will be examined here, is located in north-western Donegal. This union will be used as a case study for the county as it contains a variety of conditions and therefore will provide a balanced account of the workings of the poor law in Donegal as a whole. 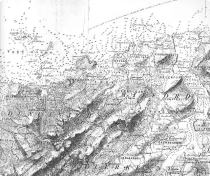 Portion of 1847 map of the Commissioners of Public Works, for County Donegal, showing Milford Union its towns and electoral divisions. Scale 1:253,440

Portion of 1847 map of the Commissioners of Public Works, for County Donegal, showing Milford Union its towns and electoral divisions. Scale 1:253,440

The central market town in the union was Milford and as was the general trend, the workhouse was located in this town. The population of Milford in 1841 was 406 but in the 1830's it was described as being only a village consisting of one street on the slope of a hill. It contained "a barrack for the revenue police, a tannery, a timber and coalyard, a school on Erasmus Smith's foundation and a mill".

The population of the union in 1841 was just over 38,100, with 5,320 landholders. Of these 20% of people were in possession of holdings of less than one acre. Milford Union as a whole comprised approximately 112,748 statute acres. A survey carried out by the board of guardians in June 1845 found that 1,126 people had holdings of under an acre while only 3 people owned holdings of between 3,000 and 4,000 acres.

Extract from the minutes of Milford Board of Guardians, giving statistics on acreage, holdings and occupiers of land in Milford Union, (BG/119/1/1, 4th June 1845)

Click here to view a transcribed version of this image