Ireland has always been blessed with excellent pastures, rich and diverse soils and an ambient climate suitable for dairy farming and production. Milk, cheese and cereals, as well as some vegetables, formed the main part of the diet from Prehistoric Ireland up to the introduction of the potato in the late 16th century. While cheese was widely eaten in Ireland, cheese making had declined considerably in the period following the dissolution of the Irish monasteries in the 12th century. Most cheese was imported from Scotland or England after this time. 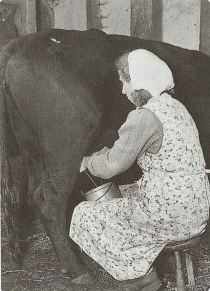 Cows were hand milked into a can, which was held between the knees.

Cows were hand milked into a can, which was held between the knees.

The value of dairy in the past is highlighted under Brehon Laws, which stated that a divorced woman was entitled to one sixth of all produce churned after her husband left her. Raiding a person’s cattle herd was seen as a cunning act of warfare, as they could not survive long without the staple foods of milk and milk products.

Dairy production in Ireland was more a matter of subsistence rather than commercial exploit up until the mid 17th century, when England began importing butter in large quantities. Following the Industrial Revolution in the mid 18th century, butter fast became Ireland’s biggest export commodity. Cork and Waterford became important shipping ports as Ireland dominated the butter market in northern Europe and the Americas.

Many farmers and farmers’ wives began to make butter as a cottage industry and quality control was absolutely unheard of. However, following complaints about the quality of Irish butter abroad, a group of Cork City merchants met in 1769 and decided that all butter would be inspected prior to export. Cork Butter Exchange was the organisation established to carry out these inspections.

Following the Act of Union in 1801, Ireland’s butter industry, and economy in general, began to decline. With the arrival of English landlords, many people produced butter to cover rent instead of producing it mainly for the export market.