The history of any language is invariably bound up with the political history and fortunes of the people who speak it: Irish has suffered many such vicissitudes.

The story of the Irish language up until the sixteenth century is one of vitality and resurgence. Irish had shown itself capable of adaptation and innovation in the face of outside influences, both linguistic and cultural. It had absorbed many loan words from Latin, and from the later Viking and Norman invaders.

Although challenged by the presence of French and English following the Norman invasions in the twelfth century, Irish regained its position as the dominant vernacular by 1500. It was the primary literary and cultural language of the native Gaelic aristocracies in both Ireland and Scotland, as well as the Gaelicised Anglo-Norman lords. In the towns, however, English prevailed and was the language of urban administration.

The latter part of the sixteenth century saw a concerted drive under the Tudors to further English rule in Ireland. This also aimed to end the linguistic and cultural differences between Ireland and England, at least among the land-owning political and cultural elites. The Tudor writer Sir John Davies recorded this attitude in his treatise of 1612 "A Discovery of the true causes why Ireland was never entirely subdued":

"We may conceive and hope that the next generation will in tongue, and in heart, and in every way else, become English; so that there will be no difference or distinction, but the Irish Sea betwixt us."

This is an illustration of the Flight of the Earl of Tyrone in 1607. The flight of the Earls is seen as the end of the era of Gaelic Chiefs in Ulster. After the Munster Rebellion against the Tudor invasion of late 16th century and a failure at the Battle of Kinsale, Hugh O’Neill, the Earl of Tyrone submitted to the Queen. However, despite a generous settlement Hugh could not live by the Tudor laws and fled Ireland with the Earl of Tyrconnell, Rory O’Donnell. They headed to Spain by boat with their company of more than ninety. Upon their departure their land was quickly distributed among the loyal Tudor officials of the Queen, and so began the Ulster plantation.

This is an illustration of the Flight of the Earl of Tyrone in 1607. The flight of the Earls is seen as the end of the era of Gaelic Chiefs in Ulster. After the Munster Rebellion against the Tudor invasion of late 16th century and a failure at the Battle of Kinsale, Hugh O’Neill, the Earl of Tyrone submitted to the Queen. However, despite a generous settlement Hugh could not live by the Tudor laws and fled Ireland with the Earl of Tyrconnell, Rory O’Donnell. They headed to Spain by boat with their company of more than ninety. Upon their departure their land was quickly distributed among the loyal Tudor officials of the Queen, and so began the Ulster plantation.

The defeat of the Ulster chiefs at the Battle of Kinsale in 1603, followed by their departure in what became known as the Flight of the Earls, signalled the collapse of the Gaelic polity, with the resultant blow to the status of their language. The following centuries saw continued suppression and forced population changes, which led to a strengthening of English in the East and North East of the country. The Cromwellian settlements, followed by the Williamite Campaign, and the subsequent Penal Laws finally destroyed any vestige of an Irish speaking aristocracy or institutions dependant upon them. The new 'ascendancy' was English speaking, as were the merchant and professional classes in the towns and cities. Although Irish continued to be the main vernacular for the vast bulk of the native Irish, it remained outside the institutions of power and state and became increasingly associated with backwardness and poverty.

Predominant among the monolingual Irish speakers were the rural poor, in particular those concentrated in peripheral areas of the South, West and North West of the country. This class were especially vulnerable to changing circumstances: they were repeatedly reduced during the nineteenth century by famine, epidemic and emigration, and were almost totally wiped out by the Great Famine of 1846-9.

The nineteenth century was, by any standards, a calamitous one for the language. According to the 1851 census the total number of Irish speakers had declined by then to just over one and a half million. By the end of the century, the number of Irish speakers had declined to 600,000. As well as the first hand ravages of famine and emigration, a noticeable shift to English had been occurring throughout the century among the impoverished Irish speakers, as English was increasingly seen as the language of social and political advancement. This was supported, in the main, by the Catholic Church, and by political leaders such as Daniel O'Connell. The establishment of the National School system of primary education by the state in 1831 had the teaching of English as one of its main aims. The use of Irish was discouraged, and led to the introduction of the notorious 'tally stick' where children were beaten if caught speaking Irish. The use of the tally stick was enthusiastically endorsed by many parents who felt that Irish was of little economic use to their children particularly when economic improvement was seen to be dependant on emigration. The success of these measures can be seen from the census figures for 1891. As well as the catastrophic drop in overall numbers of Irish speakers, an even more telling figure was the fall in the percentage of Irish speakers among the under-10 population, which had declined to 3.5% of the total. In the words of the scholar Máirtín O Murchú: "the language appeared on the verge of extinction".

However, contrary to all indicators among the Irish speaking population themselves, the nineteenth century, particularly the latter half, showed distinct changes in attitudes towards the Irish language among certain sections of the educated professional classes. A renewed antiquarian interest among scholars and writers in the ancient tales led to a renewed pride and interest in the Irish language. Although initial efforts were primarily directed at the preservation of the language and its ancient literature, a new awareness of the Irish language as a marker of national identity began to take hold, which led to the establishment of the language revival movement as part of the general nationalist movement. The Gaelic League, founded in 1893, had as its aim the restoration of the Irish language: the League ran Irish classes throughout the country, and also taught native speakers in Gaeltacht areas, who were previously illiterate in Irish, how to read and write in their own language. 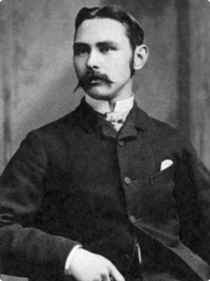 A portrait photo of Douglas Hyde. Hyde founded the Gaelic League in 1893 with Eoin MacNeill. He was the first President of Ireland, and served in that role from 1938-1945.

A portrait photo of Douglas Hyde. Hyde founded the Gaelic League in 1893 with Eoin MacNeill. He was the first President of Ireland, and served in that role from 1938-1945. 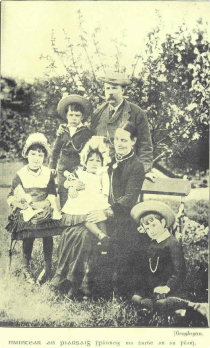 The Gaelic League was an integral part of the Nationalist movement: prominent among the leaders of the Gaelic League were Douglas Hyde and Patrick Pearse. Thanks to its efforts Irish people regained a sense of pride in their language. The ideals of the Gaelic League, while they failed to come to full fruition, had a extraordinary impact on the circumstances of the Irish language. A new standardised orthography was established for the language; a new literature came into being. Publishing in Irish flourished, and Irish was now taught at all levels in the educational system. Furthermore, with the establishment of the Irish Free State, the Irish language had at last the official backing of the state, however half-hearted or grudging that might appear over the coming years.

This is an engraving that was used in The Illustrated London News in July 1850. It shows the departure of one of the many famine ships setting sail for the United States and the Brittish Colonies in 1850. Hundreds of people gathered at the docks to catch a glimpse of their loved ones as they set sail. For many it would be the last time that they saw their family and friends.

Cromwell only spent 9 months in Ireland from August 1649 to May 1650, but his impact was to be everlasting on the island. With fierce brutality Cromwell succeed in completing the English conquest of Ireland where others had failed. Cromwell first set a course to Drogheda. 3,500 men women and children were killed over the two day battle, with the city suffering heavy bombardment. Nearby towns surrendered or evacuated. Less than a month later, Cromwell arrived at Wexford town. Here over 1500 people were slaughtered in the massacre that ensued. Cromwell rested in Youghal until the spring of 1650 and then turned his attention towards Kilkenny and the Tipperary towns of Fethard, Clonmel and Cashel. By May 1650 Ireland had been placed under British rule and Cromwell returned home. Sieges on both Limerick and Galway, the last city under Irish control to fall, ended in October and November 1650 respectively. English rule in Ireland was complete.