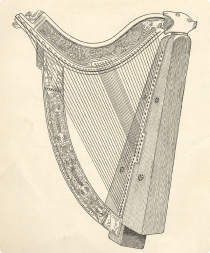 Made in A.D 1621, by Donal O'Dermody of Kilkenny, for Sir John Fitz Edmund Fitzgerald of Cloyne, County Cork, Ireland.

Made in A.D 1621, by Donal O'Dermody of Kilkenny, for Sir John Fitz Edmund Fitzgerald of Cloyne, County Cork, Ireland.

Used as the emblem of Ireland since the time of Henry VII, the harp is the instrument most associated with Ireland. This reflects the reputation that Ireland enjoyed throughout Europe for harp music and harp playing from earliest times.

The Norman Welsh writer Giraldus Cambrensis, who otherwise had nothing good to say about Ireland, remarked on the quality of the music that he heard here, and the astounding skill of the harpists. It was a highly formalised aristocratic music however, and not the standard fare of the 'folk'. Turlough Carolan (1670-1738), the so-called 'last of the Irish bards', composed and named most of his pieces for his patrons or benefactors. By this time the music and technique of the instrument was in the custody of a very small number of players.

The 1792 Harp Festival in Belfast attracted but eleven harpists, only one of whom, the 97-year-old Denis Hempson, played in the ancient manner with his fingernails. By that time the patronage system had collapsed and the surviving harpists leaving no successors, resulted in the traditional techniques of harp playing not surviving long into the following century.

A great deal of the music survived however, having been notated by Edward Bunting, and to a certain extent this has become absorbed into the repertoires of traditional musicians.

Previous - Songs and Airs
Next - Dances