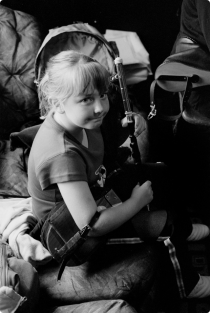 The performers of traditional music conform to no social, ethnic, class or religious profile.

It is a completely open art form, and the only real classification that might be made is one that would divide performers into those who use the music for their own and their friends' diversion (the great majority), and those who seek to earn a living from it.

The latter, especially the most accomplished, high profile players, are the public face of the music, but the use of the music for personal enjoyment, by players of all standards, is its real foundation.

In recent years many commentators have remarked on the astonishing advances in musical skill being displayed by younger players. It is believed by many that this has been facilitated by the decades spent by activists establishing a fruitful context in which youngsters can learn.

Through their recordings, dead performers are also part of the musical landscape and are constantly referenced as sources and as standards.

Previous - Collectors
Next - Settings and Occasions