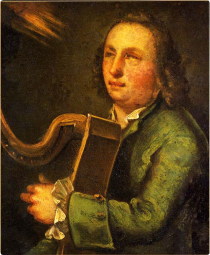 Courtesy of the National Gallery of Ireland
Enlarge image 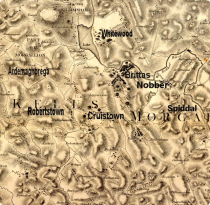 Carolan was born in 1670 in the townland of Spiddal, about half a mile from Nobber, in County Meath. The location of his father's house is still pointed out in a field on the Kells side of the railway crossing, to the south-east side of the road. His father, John Carolan, was a blacksmith and small farmer. The young Turlough attended a school run by the Cruise family in nearby Cruicetown. The Cruises were an Anglo-Norman family who had been Gaelicised over the centuries. Despite the loss of their property at nearby Brittas to the Bligh family in the Cromwellian Plantation of the 1650s, they clung on in Cruicetown and Rahood and the family continued as patrons of native poetry, music and learning.

At the Cruise school Carolan met and fell in love with a daughter of the family, Bridget Cruise

Bridget Cruise lived at Rahood near Nobber and was Carolan's first love. They met while Carolan attended the school run by the Cruise family. Carolan composed many tunes for Bridget although they parted when Carolan's family moved to Roscommon. Meeting at Lough Derg many years later Carolan recognised Bridget by the touch of her hand.

. So intense was his affection for Bridget

This is a piece of music composed by O Carolan for his first love, Bridget Cruise. Carolan formed a close attachment to her while at school in Nobber. He composed four pieces of music addressed to her.

that in later years he composed four airs which bear her name and also three or four songs in her honour. His friend Charles O' Connor related that throughout his life Carolan always recalled Bridget with great affection. Tradition has it that years later when Carolan was blind, the pair met again while on pilgrimage at Lough Derg. When Bridget reached out to help the blind man, Carolan instantly recognised her by the touch of her hand and exclaimed in Irish: "By the hand of my godfather, this is the hand of Bridget Cruise!

Carolan's family moved to north Roscommon when he was about fourteen years old. There he was fortunate in gaining the enlightened patronage of the MacDermottroe and O'Connor families, both of old Gaelic aristocratic descent. In keeping with age-old Gaelic tradition, both families still supported poets, harpers and native learning. So when Carolan was struck blind by smallpox at about eighteen years of age, Máire MacDermottroe had him taught to play the harp. On his completion of a three year spell of training, she gave Carolan a horse, a guide and some money to launch him on his career as an itinerant harper. Shortly after the defeat of Catholic Ireland at the Battle of the Boyne in 1690 he set out on the roads of Ireland.

Carolan's first visit was to a Leitrim landowner named Reynolds who was of old Gaelic stock. Reynolds persuaded Carolan to try his hand at poetry and suggested as a subject a battle between the fairy hosts of two neighbouring hills. The result was the graceful song "Sheebeg and Sheemore". From then on Carolan normally composed verse to accompany his tunes.

Previous - The Battle of the Boyne
Next - His Later Years