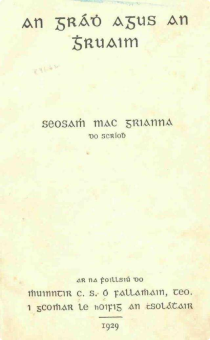 Born in Donegal in 1900, Seosamh Mac Grianna, brother of Sťamus ” Grianna trained as a teacher in Dublin.† He faught as a republican in the Irish Civil War, for which he spent some time in prison.† After his release he went to work as a translater for the Department of Education, translating great works such as Ben Hur and Ivanhoe.

He also wrote his own books, most notable is An GrŠ and an Gruaim, 1929, pictured left.