The vocal music is the other large branch of Irish traditional music. This comprises mostly the melodies associated with song-texts, and a smaller number of purely instrumental airs for which no associated words are known. The items of this part of the repertoire are known as 'airs', distinguishing them from the 'tunes', which are associated with dance. While the dance tunes may be classified according to the rhythm of their associated dances, song airs come in various rhythms that match the metres of their associated texts. Along with their use in singing, airs are often played by musicians as instrumental pieces. In this case, the way in which a singer would phrase the melody is taken as the ideal model to follow. 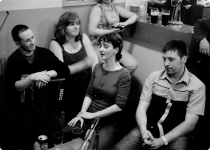 The Irish song repertoire is extremely varied and includes most of the genres that might be expected by anyone familiar with other types of folk music. There are songs of love, fortunate and unfortunate; of misfortune, exile and death; songs of popular dissent ranging from agrarian activism to outright revolution; humorous and comic songs, and many more. The work-song, common in other traditions, was reported in the mid-nineteenth century but seems not to have survived the Famine.

All this material exists in (at least) two languages - Irish and English - with isolated instances of songs having been noticed in Fingallian and Yola (distinctive dialects once found in Fingal in co. Dublin, and in the baronies of Forth and Bargy in county Wexford). Irish Travellers have their own vocabulary called 'Cant' or 'Shelta', and songs in this have also been recorded.

It is popularly believed that, with the 'Flight of the Earls' and the exiling of the native aristocracy and gentry, the Gaelic poets, deprived of their patronage and support, and finding themselves among the common people, enriched popular song with skills that before had been deployed in the courts of their patrons. Whether or not this is so, the corpus of song in Irish includes a great number of sublimely beautiful lyrics, mostly on the subject of desire or love of country. An example is the song Dónal Óg, in which a woman sings of her anguish at the consequences of her passionate love affair. The final verse runs:

Frank O'Connor's verse translation, while allowing the non-Irish speaker to enjoy the imagery of the poem, cannot convey the word-skill of the original:

You took what's before me, and what's behind me;
You took east and west when you would not mind me;
Sun, moon and stars from my sky you have taken,
And God likewise, or I'm much mistaken.

Traditional song in Ireland has customarily been performed unaccompanied. Singers in Irish particularly have added interest to their renditions by embellishing the song melodies with ornate gracing and decorations. This style of singing, known as sean-nós ("old style") is associated especially with Irish speaking communities. 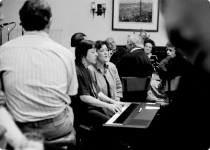 Song in English has been a part of Irish music since the seventeenth century, and various regional styles of singing exist, each with its own particular repertoire to call upon. Those of Munster and the north-east and Dublin are particularly notable. There are a huge number of songs in the various styles to be found. These include items on all the usual subjects of folk balladry. The repertoire includes pieces composed in the styles of Irish language songs, using Gaelic conventions of rhyme and prosody. In the earlier songs, these display their writers' fascination with the novelty that, for them, was the English language. In the northeast there are songs imported from Scotland, along with a great many of local composition made on the imported models. Dublin has a tradition that partakes to a large degree of the style of the music-hall, Irish and English. Of the great Scottish and English ballads, which might have been expected to spread throughout the country, only a handful are found.

The earliest Irish-made song in the English language is said to be "The Royal Blackbird", a song in praise of the "Old Pretender" to the thrones of Scotland and England, James VII and II:

One fine summer's morning of soft recreation
I heard a fair maiden making sad moan,
With a sighing and sobbing and sad lamentation
A-saying "My Blackbird most royal has flown."
My thoughts they deceive me; reflections do grieve me
And I am over-burdened with sad misery.
Yet if death it should bind me, as true love inclines me
I will follow my blackbird wherever he be.