Michael Kelly and the Mozart Connection 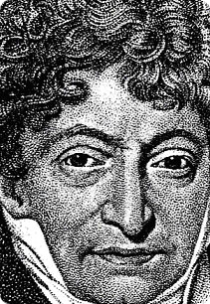 Wolfgang Amadeus Mozart travelled extensively throughout Europe, appearing before Emperors, Popes, Kings, Queens and the musical world. Although he never visited Ireland he did have a connection with Dublin through his friend and fellow musician, Michael Kelly. Michael Kelly was born in Dublin on Christmas Day, 1762 at 13 Mary Street. He was the eldest son of Thomas Kelly, Master of Ceremonies at the Vice-Regal Court, Dublin Castle and also a prominent wine merchant. He showed musical talent from an early age and received vocal training from various teachers, culminating in an audition with Venanzio Rauzzini, a distinguished visiting male soprano who recommended he go to Italy for sustained teaching.

Dublin at that time was a fashionable centre of music where all the British and Continental artists came to sing at the Rotunda and the theatres at Crow Street and Smock Alley. Before departing for Italy, Kelly was invited to sing in La Buona Figliola at Smock Alley and in Clarissa and Lionel at Crow Street. He sang as a soprano for his voice had not yet broken.

On May 1st 1779, the teenager set sail for Naples. On arrival there he presented himself, with letters of introduction, to the British Ambassador, Sir William Hamilton. Hamilton was a famous archaeologist whose interest in Mount Vesuvius earned him the sobriquet 'the Volcano Lover'. He was later to marry Emma Lyon who subsequently, as Lady Hamilton, became Lord Nelson's mistress.

Kelly commenced his studies at the Conservatoire and was soon singing at the homes of the Neapolitan gentry, leading to his appearance before the King and Queen of Naples; the first Irishman to sing in Italy. He was introduced to the singer, Aprile (known as 'the father of all singers'), who took him as a pupil and introduced him to the public at Palermo on July 12th 1780. From Palermo he went to Leghorn (Livorno) with introductions to several impresarios. On the quay there he overheard an English couple comment, with reference to his long golden hair, about the girl dressed in boy's clothing! He accosted the pair, finding they were Anna (Nancy) Storace, a budding soprano and her brother, Stephen, an accomplished composer. They were to become firm friends and their careers blossomed together over the years.

His first appointment was as first comic tenor at the Lucca Opera for a period of ten weeks and from there he moved on to Florence. He was well received although he modestly attributed his success to his youth and the presence of many expatriates at his performances. Foremost amongst these was Bonnie Prince Charlie (the Young Pretender) whom Kelly described as being tall but stooped and showing little resemblance to the Young Chevalier who had beguiled the Scottish clans in 1745. Later performances were at Gratz, Verona, Modena and Parma. On his arrival in Venice the Austrian Ambassador informed him that the Emperor had issued orders to assemble an opera company in Vienna, employing only artists of the highest standards. He offered Kelly a year's employment, which was gladly accepted, particularly as Nancy Storace was also to be employed. 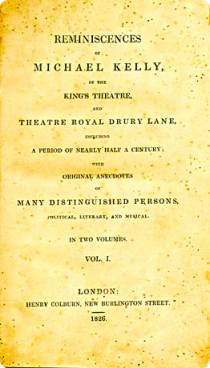 Whilst in Vienna he visited Antonio Salieri, sub-director of the Imperial Opera who offered him a leading role in the first production of the new company, La Scuola dei Gelosi, in which he scored a great success. Vienna at that time, as now, was a great centre of music with many great composers working there, including Gluck, Haydn and Mozart. After a concert given by Mozart, Kelly was introduced to the great composer and his wife. In his memoirs, Kelly described Mozart as:
'a remarkably small man, very thin and pale, with a profusion of fine fair hair, of which he was rather vain. He gave me a cordial welcome to his home and I spent a great deal of time there. He always received me with kindness and hospitality. He was fond of billiards and many a game have I played with him, but I always came off second best'
At the time Mozart was twenty-eight with only another decade to live.

Further operatic success came in Paisiello's I Re Teodoro a Venezia, Kelly's powers of mimicry having helped him obtain the role. He later played in Gluck's L'Iphigenia in Tauride' and L'Alceste', having been chosen for the roles by the composer. His friend, Nancy Storace, often partnered him in these and other operas.

There was considerable competition amongst the composers at the Imperial Court regarding a new opera commissioned by the Emperor: the Emperor eventually chose Mozart's Le Nozze di Figaro with a libretto by Lorenzo da Ponte. Whilst Mozart was composing the opera Kelly called on him and Mozart introduced him to a duet he was currently writing. The two sat down and sang the duet, Crudele perché finora. Kelly afterwards could proudly claim to have been the first person to hear the duet and also to have sung it with the composer. He also left vivid descriptions of the rehearsals where Mozart was on stage keeping time, dressed in a crimson pelisse with a gold-laced cocked hat, and who often cried out with pleasure as he first heard the singers interpret his glorious music. The first performance took place on May 1st 1786 at the Burgtheater with the Emperor in attendance. It was enthusiastically received; the cast for this historic occasion were:
Il Conte Almaviva Stefano Mandini
La Contessa Signora Laschi
Susanna Anna Storace
Figaro Francesco Benucci
Cherubino Signora Busani
Don Curzio Michael Ochelley
Basilio Michael Ochelley 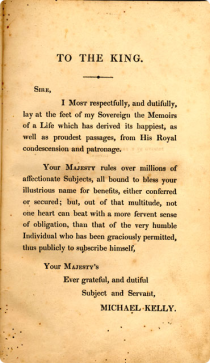 Ochelley was Mozart's interpretation of Kelly's name. To have appeared in the first performance of this world-esteemed opera, under the baton of the composer, was a source of joy to the singer for the rest of his life. It is a feat that deserves more recognition in his native city.

Michael Kelly went on to further fame in Great Britain and Ireland as a leading singer, often partnered by Nancy Storace and other leading sopranos. He appeared in operas by Stephen Storace, others written by himself and of course the works of Mozart. Later, he became a theatre manager, in partnership with Richard Brinsley Sheridan, at Drury Lane and Covent Garden. His last performances were in Dublin in 1811, where he sang in Cosi fan tutte and other operas on the same stages he had first graced thirty-two years earlier. He died at Margate on October 9th 1826 and is buried at St. Paul's Church, Covent Garden, the actor's church.