This version of 'Mo Ghile Mear' is from Peadar Ó Riada - Acadamh Fodhla (Academy of Ireland).

The original version of 'Mo Ghile Mear' was poem ascribed to Seán Clárach Mac Dómhnaill (1691-1754). The title translates directly as 'My Dashing Darling' and is a lament by the Gaelic goddess Éire for the exiled Prince Charles Edward Stuart (1720-1788), who was more commonly known as 'Bonnie Prince Charlie' or 'The Young Pretender'. 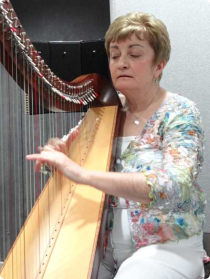 Prince Charles Edward Stuart was the grandson of James II and VII, and was the second Jacobite pretender to the throne of Great Britain and Ireland. The Jacobite movement was a response to the deposing of James II and VII by William of Orange and aimed to restore the Stuart kings to the thrones. They had many supporters among Catholics who hoped the Stuarts would end the Penal Laws. However, following the unsuccessful Jacobite uprising of 1745, lead by Prince Charles Edward Stuart, he fled from Scotland to France. His flight became legendary and he has been immortalised as a romantic figure in songs such as 'An Buachall Bán' (The Fair Lad) and 'An Seabhac Siubhal' (The Roving Falcon).

Mac Dómhnaill's despair at the prince's flight is vivid throughout 'Mo Ghile Mear', as all hopes of revolution were crushed. The poem is set to the air of 'The White Cockade' by Jim Cannell, who was an Irish exile in Scotland during the 19th century.

Other poems of the time in support of the Stuart cause include 'A Chuisle na hEigse', 'Eirigh Suas' , 'Loch na gCaor'and 'Rosc Catha na Mumhan'.