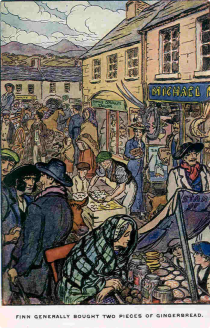 Illustration by Jack B. Yeats from A Boy in Eirinn by Colum.This edition was published in Londom by J.M.Dent&Sons and was dedicated to P.H.Pearse.

Illustration by Jack B. Yeats from A Boy in Eirinn by Colum.This edition was published in Londom by J.M.Dent&Sons and was dedicated to P.H.Pearse.

Irish Literature is one of the great literatures of the modern world. It is so precisely because of its engagement with the processes of modernity. So often we think of Irish writing being possessed of a 'backward look', poets and dramatists looking to a mythical past in order to escape the unpalatable difficulties of the present and the demands of the future. The evidence of the writing itself, though, tells a different story. It is a story that sees Irish writers engaging directly with an Ireland in a seemingly constant state of flux. For Ireland has been, certainly over the last 200 years, a place of transition.

Ireland has moved from being a colony ruled by Britain to being an independent State. In that time too, Ireland has moved from being a country where the Irish language was spoken by the majority living on the island to a situation where the English language is now the means for everyday discourse. Economically, too, Ireland has evolved from being a predominately rural based economy to being, in the present moment, at the forefront of technological business and development in Europe. Such swift change obviously has consequences for any society but in Ireland, in particular, these changes have produced anxieties and uncertainties concerning our sense of who we are, where we have come from and where we might be going.
Irish writing over the last 200 years has reflected this reality of transformation. Often, it has been our artists and our writers who have most successfully charted and traced these upheavals in their work. From the poetry of W.B. Yeats and Eavan Boland, the drama of J.M. Synge to Brian Friel and Marina Carr, and the prose fiction of James Joyce and John McGahern, Irish writers have attempted to confront the problems of a society experiencing the trauma of rapid change.

It is a testament to their gifts that each, in their own unique way, has attempted to come to some form of understanding about these issues surrounding language and identity, tradition and modernity. In doing so, many of our writers have not only been able to connect with Ireland specifically but have been able, also, to situate Ireland's experiences in a international context.

Derek Hand teaches in the English Department in St. Patrick's College, Drumcondra. He is interested in Irish writing in general and has published articles on W.B. Yeats, Elizabeth Bowen and on contemporary Irish fiction. His book John Banville: Exploring Fictions was published in 2002 by The Liffey Press. He is a frequent reviewer of Irish fiction for the Irish Times.

Votes For Women -
Next - The Language of Irish Writing