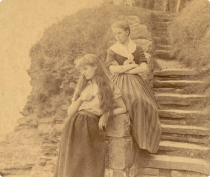 Eva Gore-Booth was born into the privileged world of the Anglo-Irish landed gentry on May 22nd 1870 at Lissadell House Co. Sligo. Sir Henry Gore-Booth, her father, was considered an "improving landlord" and was proud of the good relations between himself and his tenants - something which was far from the norm in late 19th century Ireland and something his own father, Sir Robert did not enjoy.
Her childhood was idyllic, though she was thoughtful, preoccupied and withdrawn as she described in her essay "The Inner Life of a Child". She lacked nothing material but was aware of a hunger for a deeper, spiritual satisfaction.

As she grew into a young woman her life, like that of her sister, Constance involved painting, reading and writing. Socially, it was a circuit of high society gatherings in Sligo where W.B.Yeats was a visitor, and who, in 1894, before any of her poems were published, encouraged Eva in her writing and famously described the sisters in his poem.

"In memory of Eva Gore-Booth and Constance Markievicz"

The light of evening, Lissadell
Great windows open to the south
Two girls in silk kimonos, both
Beautiful, one a gazelle

This social lifestyle also revolved around Dublin and London, where both sisters went through the obligatory social ritual of being presented at court. However neither sister accepted the role which young women of their time and class were expected to play. While it was not unusual for members of the Irish landed classes to involve themselves in political agitation - indeed, the roll call of Irish patriots is top heavy with Anglo-Irish names - women were rarely if ever noted as protagonists. Idealised and much quoted as inspirational - Caitlin Ni Houlihan, Roisin Dubh, Mother Ireland - women were passive, maternal and domesticated. There were factors though, which would have been influential in the roles Eva and Constance adopted.