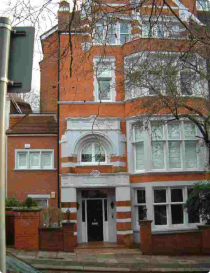 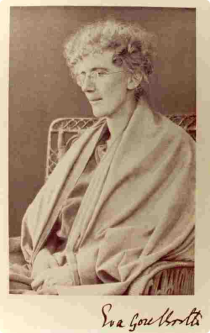 The Pentonville referred to is the prison where Roger Casement was hanged. Eva admired him greatly and was extremely active in the campaign for clemency, going as far as meeting with King George V, in a vain attempt to save Casement. When Constance was arrested, sentenced to death and, due to her gender, reprieved, Eva visited her in Mountjoy Jail on the day that James Connolly was shot and was, in fact, the harbinger of that news. She regularly visited Constance during her incarceration in various prisons and kept up a correspondence, now lost, in which, to judge from Constance's responses, her admiration and love of her sister are evident, as in her poem " To C.M. on Her Prison Birthday February 1917"

To C.M. on Her Prison Birthday February 1917

To CM on her prison birthday

What has time to do with thee
Who hast found the victor's way
To be rich in poverty,
Without sunshine to be gay,
To be free in a prison cell?
Nay on that undreamed judgement day,
When on the old world's scrap-heap flung,
Powers and empires pass away
Radiant and unconquerable
Thou shalt be young

The effort Eva put into these visits and later into the attendance at the many post-war trials of conscientious objectors, following the trauma of the Rising took a physical toll on her health, which had always been poor and she never really recovered. She and Esther returned to Italy for a year in 1920 / 21. On their return to Hampstead she immersed herself in study for her analysis of the Gospel and the production of her last volume of poetry. Her illness, now known to be cancer of the bowel was kept secret even from Constance. During Eva's illness an unobservant Yeats, in another quotation from the poem "In Memory of Eva Gore-Booth and Constance Markievicz" seems to attribute the symptoms of her illness to her thwarted ambitions

In Memory of Eva Gore-Booth and Constance Markievicz

I know not what the younger dreams -
Some vague Utopia – and she seems,
When withered old and skeleton-gaunt,
An image of such politics. 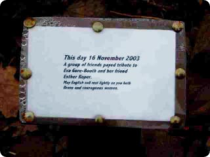 However Eva had found serenity in her illness and imminent death, which implies that she had found her goal.

A reading of After The Storm © Sligo County Library

Suddenly everywhere
Clouds and waves are one
The storm has cleared the air
The sea holds the sun
And the blue sky
There is no under, no above,
All is light, all is love
Is it like this when you die?

Though her poetry and plays may be out of print Eva, and Esther, are not forgotten.

Listen to The Little Waves of Breffny