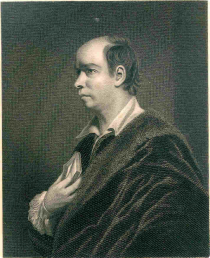 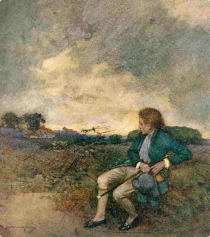 Oliver Goldsmith was born in 1728, possibly at Smith-Hill House, Elphin, County Roscommon. Soon after Oliver was born his father was appointed curate in Kilkenny West, County Longford and so his family left Roscommon and moved to the neighbouring county. They settled in a pleasant house with a farm of about seventy acres, located just outside the village of Lissoy, which Goldsmith later immortalised as "Auburn" in his famous poem The Deserted Village.


Young Oliver was an ungainly child, a trait that was to stay with him throughout his life. A major influence at this stage of his life was his master at the village school of Lissoy, Thomas Byrne, who together with the wandering entertainers gave the young Goldsmith his first taste for versifying. As a child he enjoyed the countryside around Lissoy although an attack of smallpox at nine left his face badly marked for life.

After he recovered from this illness Oliver began his academic career in earnest. He was firstly sent to the diocesan school at Elphin, County Roscommon and then on to Cambell's school at Athlone, followed by a period at Patrick Hughes' school at Edgeworthstown where he acquired the knowledge of Latin so evident in his prose. In 1744 he went to Trinity College Dublin where his personal ungainliness and crude manners prevented him making many acquaintances.

After graduating somewhat fortuitously in 1749 Goldsmith drifted aimlessly from one job to another, travelling throughout Europe often earning his board and keep by simply playing the flute. When he returned to London in 1756 his fortunes began to improve. During this period the London book market was expanding rapidly with the middle class of the time eager to devour all sorts of knowledge. Goldsmith began writing and translating prose on all branches of thinking and soon his essays were being published in The Public Ledger, establishing his reputation as an original thinker.