Begley: The Diocese of Limerick 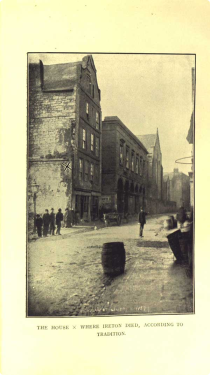 John Begley's The Diocese of Limerick was published in the early 20th century. The first volume describes the ancient and medieval history of Limerick diocese and the second describes the fortunes of the diocese during the upheavals of the 16th and 17th centuries.

The diocese of Limerick includes most of County Limerick and a portion of County Clare . In the 5th century St. Patrick visited the area and the conversion of the native Irish was continued by his disciple St. Senan. St. Munchin established a monastery and school at Mungret which taught thousands of students. Mungret was captured and plundered by the Vikings who established their stronghold at Llmerick in the 9th century and launched raids up the River Shannon to pillage Clonmacnoise and other Christian monasteries. The Vikings were defeated by Brian Boru in the 11th century and Limerick became part of the Kingdom of Thomond . The Vikings of Limerick had their own bishop who was subject to the Archbishop of Canterbury.

About 1100 Gillebert who had been abbot of Bangor became Bishop of Limerick and apostolic delegate through the influence of St. Anselm of Canterbury whom he met in Rouen , France . At the time there was an attempt to introduce a unified liturgy of into the Irish church. At the Synod of Rathbreasail (1118) the division of Ireland into diocese was decided and Limerick was removed from the control of Canterbury and became part of the metropolitan see of Munster .

During the English Reformation, William Casey became the first Protestant Bishop of Limerick during the reign of Edward VI. Both the Gaelic Irish and many of the Old English, the descendents of the Norman conquerors, refused to renounce their Catholicism resulting in centuries of religious conflict in Ireland.

During the seventeenth century the city of Limerick played a prominent part. It was besieged and captured by Catholic forces in 1642 who had begun a rebellion in Ulster the previous year. It was besieged and captured a second time by the Parliamentarian forces of Oliver Cromwell who spared the Catholic Bishop of Limerick who died in exile. Persecution of the Catholic Church meant that for a twenty year period there was no bishop until the more tolerant reign of the restored British monarch, Charles II.

His Catholic brother, James II succeeded him sparking a war with his Protestant nephew King William III of Orange for control of the throne. Ireland became the battleground between the Jacobites and the Williamites. Following the Jacobin defeat at the Battle of the Boyne in 1690, the city of Limerick was twice besieged before the Jacobites under William Sarsfield signed a treaty of surrender in 1691.

Under the terms of the Treaty of Limerick the rights of Catholics were to remain secure but throughout the 18th century a series of penal laws were enforced that persecuted Catholics religiously, politically and economically. From 1702 to 1720 again there was no Catholic bishop of Limerick and there were no Catholic churches in the city. However in time the laws were defied and Catholics eventually outnumbered Protestants, became wealthy and built churches. The penal laws were eventually repealed from the late 18th century onward culminating in Catholic Emancipation in 1829

During the late 18th and 19th century the Catholic Church in Limerick grew from strength to strength. The building of St. John's Cathedral and other churches began, the Christian Brothers founded shcools for the education of boys and the Good Shepherd, Presentation, and Mercy orders opened several convents.

However the 1840s was a dark time as the Great Potato Famine ravaged the country killing about a million and forcing a million more to emigrate. In the latter half of the 19th century the drive for land reform by the Land League and the Irish Parliamentary Party was supported by the Catholic diocese. Just after the turn of the 20th century when Begley wrote his book, the power of the Anglo-Irish Protestant elite who had ruled Ireland since the 17th century was in decline. by 1927 when the second volume was written the independent Irish Free State had been established. In this new state the Irish Catholic church was to enjoy a powerful influence over politics and morality.

Previous - Limerick County
Next - Dowd: Limerick and its Sieges