Thomas D’Arcy McGee was born on 13th April, 1825 in Carlingford, Co. Louth, but his family moved to Wexford he was eight years old. He showed an aptitude for oratory at a very early age and at the age of just thirteen, he delivered a speech at Wexford. 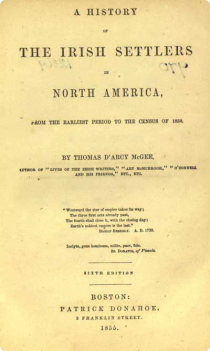 Four years later, he emigrated to America and quickly became known as an outstanding writer and public speaker in Boston. He began to work as assistant editor of the Boston Pilot, a Catholic newspaper. A few years later he returned to Ireland where he became politically active and edited the nationalist newspaper The Nation. His support for and his involvement in the Irish Confederation and Young Irelander Rebellion of 1848 resulted in a warrant for his arrest and McGee returned to the United States. Between 1848 and 1853 he established two newspapers, the New York Nation and the American Celt. His writings at first were very bitter and anti-English; but as years passed he saw that a greater measure of political freedom was possible under the British constitution than under the American. He had now become well-known as an author, and as a lecturer of special ability.

In 1857 McGee took up residence in Canada, driven from the United States by the attacks of the extreme Irish revolutionaries and was admitted to the bar of the province of Lower Canada in 1861. In 1864 he was appointed Minister for Agriculture in the administration of Sir E. P. Tache, and thus he served the country until his death. He actively supported the policy of federation and was elected a member of the first Dominion parliament in 1867.

On the 7th of April 1868, after having delivered a notable speech in the House, an appeal to the people of Nova Scotia to stay in confederation, he was shot by an assassin as he was about to enter his home at Ottawa. His utterances against the Fenian invasion are believed to have been the cause. P. J. Whelan was executed for the crime. All classes mourned his loss and within a few weeks of his death parliament granted an annuity to his widow and children.

While living in the States, McGee wrote The History of the Irish Settlers in North America and The Catholic History of North America. These were pioneer studies in their field. According to The History of the Irish Settlers in North America the first Irish settlers to North America came in the late 1600s. This database is a history of these Irish immigrants from these early times up until the United States Census in 1850. Thomas McGee paints an interesting picture of Irish settlements, churches, and influence in government. This volume is sure to prove useful in understanding the history of early Irish immigrants to North America. His prose writings reveal another side of his talent, his capacity for combining sound scholarship with a vivid and eloquent style which appealed to the regular reader.