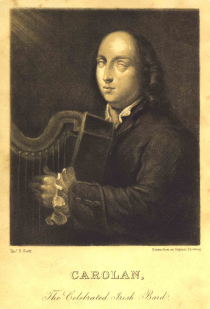 James Hardiman (1782–1855) was born in Westport, Co. Mayo. After his initial education, he went to Dublin where he trained as a lawyer and became sub-commissioner of public records in Dublin Castle. He later became librarian of Queen's College, Galway (now the National University of Ireland, Galway).

As an active member of the Royal Irish Academy he collected and rescued many examples of Irish traditional music.

With his anthology, Irish minstrelsy: or, Bardic remains of Ireland (2 vols, 1831), Hardiman's aim was to establish the antiquity of Irish verse which he felt equalled that of Rome or Greece. The two volumes contain a large selection of Irish verse accompanied by English translation. Hardiman hoped the work, one of the first published collections of Irish poetry and songs, would offer evidence of the richness of Gaelic culture.

The James Hardiman Library at the NUI , Galway, is named in his honour.

Previous - Graves: The Irish Song Book
Next - Henderson: The Flowers of Irish Melody