Aerial Photograph of Begerin Island and the North Slob.

Aerial Photograph of Begerin Island and the North Slob.

One of the most famous early Christian sites in County Wexford is the island of Beg-Erin, now part of Wexford Slobs. Beg-Erin was one of several small islands of glacial drift that protruded above the mud flats of Wexford Harbour.

In the fifth century, it became associated with an early Christian missionary to the county, St Ibar, who established a monastery there. According to the Annals of the Four Masters, Ibar was an Ulsterman of noble birth, being descended from the tribe of Ui Echach who occupied east Co. Down. The Book of Leinster suggests that he got his name because he was the same reddish colour as the yew tree (iur, in Irish) at his birth.

Legend holds that it was Ibar who gave the island its name. It seems that he was reluctant to accept the jurisdiction of St Patrick whom he regarded as a foreigner, and for this Patrick told him, 'You shall not be in Ireland'. Ibar retorted, 'Ireland is the place where I shall be', and he named his island Beg Erin, 'Little Ireland' to fulfil this prophesy. However, this traditional account of the naming of the island cannot be corroborated and the true derivation of the name remains a matter for academic debate. It seems likely, however, that the island was a sacred place in pre-Christian times. At least one academic, R.A.S. Macalister, has argued that it derived much of its sanctity from a great yew tree and that in reference to this tree the island was called, among other names, Inis Iubair, the island of the yew tree. From this, Macalister speculates that the name Iubair or Ibar, meaning yew, became attached to the saint at the expense of his real name, which was eventually forgotten. 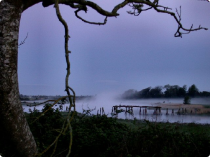 Photograph of the mist rising over Begerin Bridge at dusk. The remains of the bridge are visible through the mist and there is a yew tree to the foreground.

Photograph of the mist rising over Begerin Bridge at dusk. The remains of the bridge are visible through the mist and there is a yew tree to the foreground.

In common with other early Christian missionaries, Ibar sought to counteract the influence of the druids and founded a school or monastery on his island to isolate his followers from the pagan influences on the mainland. Ibar died about 500 and was buried on the island. His monastery lasted for several centuries after his death, despite being ravaged by the Norse on several occasions during the ninth century. Two unusual stone slabs, dating from the ninth or tenth centuries, were found at Beg Erin. Recent research on the artwork on these stones, one now in the County Museum at Enniscorthy, the other in the National Museum, points to a strong influence from the Isle of Man, Cornwall and Scotland. This suggests that some Vikings may have joined the monastery at Beg Erin and that, far from being isolated, the island was at least as culturally attuned to the artistic developments on the far side of the Irish Sea as the rest of Ireland.

It has been suggested that the monastery was closed in 1160 but no evidence has been found to substantiate this claim. In 1171, the inhabitants of Wexford town imprisoned the Norman leader, Robert Fitzstephen on Beg Erin. Ten years later, the Anglo-Flemish family of Roche, to whom the island had been given after the Norman conquest, presented it to the Benedictine monks of St Nicholas at Exeter. The Benedictines built a church on the island in the thirteenth century, some remains of which can still be seen. In 1400, the island passed to the Augustinian canons of Selskar Abbey in Wexford town, but there is no evidence that they established a church there.

The memory of Ibar and his monastery on Beg-Erin continued to influence the Wexford area well into the seventeenth century and down to the present day. In 1682, a former Cromwellian officer, Solomon Richards, wrote that there was on the island a little wooden chapel with 'a wooden idol in the shape of an old man called St Iberion'. This statue was an object of veneration and was used for taking oaths. Ibar is still widely used as a Christian name in the Wexford area. The Church of Ireland parish, church and school in Wexford town are named after the saint (St Iberius), as is the municipal cemetery and a terrace of houses in the town. The medieval parish of St Ivor's, now in Lady's Island parish, was also dedicated to him.

Lacy, Thomas: Sights and scenes in our fatherland, London, 1863

Previous - Birdwatcher's Code of Conduct
Next - The Greenland White-fronted Goose