Fauna of the Wexford Sloblands and Harbour 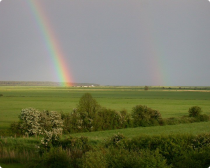 Photograph of a rainbow over the North Slob.

Photograph of a rainbow over the North Slob.

Over half of Ireland's wild mammal species may be found on the Wexford Slobs or in the harbour area. Despite their relatively recent origins, the slobs and their environs provide a wide variety of habitat types, ranging from coniferous woodland to the rocky shore.

The list for the Wexford Slobs at present stands at 19. Each of the major mammal groups are represented, with the exception of the red deer.

The Reserve lands and the North Slob, which are openly grazed farmland, are particularly attractive to the Irish hare which is a protected species throughout the area. Grey seals and the occasional common seal are seen in Wexford harbour and there have been rare sightings and strandings of four whale species, two dolphin species and common porpoise.

Drawing of an Otter's Head in water.

Photograph of a Red Squirrel running up a tree in the Raven Wood.