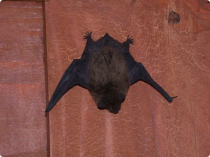 Photograph of a Pipistrelle Bat hanging by its sharp claws

Photograph of a Pipistrelle Bat hanging by its sharp claws

The bat is the only mammal capable of true flight. Bats are particularly skilful and agile and are able to manoeuvre accurately at low speeds. They feed mainly on small flies and moths. Their wings are a thin skin supported by their specially adapted elongated arms and their second, third, fourth and fifth fingers. The skin is also attached to the body and legs and often extends between the legs, attaching to the tail. Only the thumb is clawed and this, along with the toes, is used for gripping and hanging.

During the day bats may rest in a variety of roosting places, such as caves, crevices, hollow trees and buildings. In summer they tend to leave their roost sites to feed just before dark.

Insect eating bats are helpful to humans, and many bat species play an important role in plant pollination and seed dispersal.

A female bat produces just one young in the year. She does not make a nest but chooses a warm, clean, dark location to rear her offspring. This spot is called a nursery roost and is normally made in a bridge, a building, a cave, a church or a suitable tree. The male plays no part in the rearing of the baby and roosts in a different place.

Bats hibernate in the winter, as their food supply of insects becomes scarce. They normally hibernate in special winter roost sites, which may be a cave, a mine or even a cellar. They undergo elaborate changes in their body system so that they can survive the winter months without eating. During this hibernation period, bats are very vulnerable as their body temperature drops from around 37oC to about 10oC and their heartbeat drops from several hundred beats per minute down to about ten beats per minute. If bats are disturbed during the winter months they run the risk of dying. Bats are particularly prone to dehydration as they have an enormous skin area in comparison to their size. This is why they hunt mainly at night and are found in cool dark places.