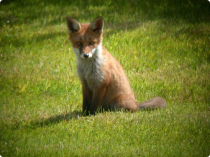 Photograph of a fox cub.

Photograph of a fox cub.

The Red Fox is common through out the area and is easily identified by its reddish brown coat with light under-parts. Traditionally found in woodlands, foxes are now common on farmland, sloblands and have adapted successfully to urban life.

The foxes most distinctive features are its narrow muzzle, large ears and long bushy tail with a white tip, normally 38cm long. Foxes are normally solitary and are most often seen at dusk. Young males, without territories, tend to roam widely. The vixen (female) is smaller than the dog (male). Although carnivorous, having a varied diet of rabbit, small mammals and birds, foxes will also eat insects, worms, fruit and discarded rubbish. Urban foxes have become very adept at raiding town dustbins.

Mating begins in late December and January. The vixen gives out a powerful love call attracting dog foxes in the area. The young are usually born in February to mid-March, the litter normally consisting of four or five cubs, in a dug-out burrow called a den. There may be a number of dens in a territory and the mother may move the cubs to different locations for safety. The young are independent by autumn and fully mature a year later.

Foxes can be very vocal at night, the males giving a high pitched bark whilst the vixen can produce an ear-piercing scream. It has been noted recently that a new sub-species of urban fox, has developed longer legs to help them jump over walls and get into dustbins.

Black on white drawing of a Fox in high grass.

Fox cubs on the lawn

Fox cubs on the lawn -

Previous - The Natterjack Toad
Next - The Smooth Newt