Flora of the Wexford Sloblands and Harbour 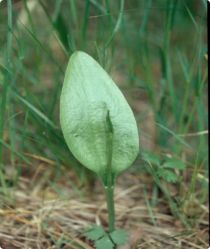 Photograph of an Adder

Photograph of an Adder

Size: Grows to a height of around 10cms.

Distribution: Found mostly in southern Ireland and England and is quite rare.

Flowering months: As with other ferns it does not flower, but usually appears between June and August. The remainder of the year is spent underground as a slender rhizome.

Special features: Compared with most of our other native ferns, this one is tiny and easily overlooked. The elliptic leaves are mostly solitary, but sometimes paired. Growing from the centre of the plant is an un-branched spike, approximately 40mms long, which contains two rows of reproductive spores. It is this spike, which gives the plant its name.

This plant often appears on sites of ancient meadows.