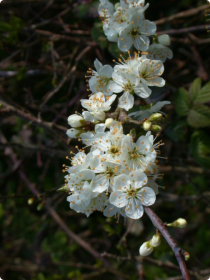 Photograph of a Blackthorn bush in flower.

Photograph of a Blackthorn bush in flower.

Flowering months: In flower during March, April and May.

Special features: The blackthorn is very common in hedges in rural Ireland. Trees and shrubs, leaves are simple with stipules. Flowers have 5 sepals and 5 petals. It flowers before its leaves appear, and its fruit is a drupe called a sloe. This very bitter black fruit, about 10 to 15 millimetres in diameter, may be eaten or used to make wine.

In olden times a shillelagh, made from blackthorn branch, was carried by travellers in case of attack. Some of these were made from oak, and they get their name from a place in Wicklow called Shillelagh. A whack of this cudgel would be remembered!