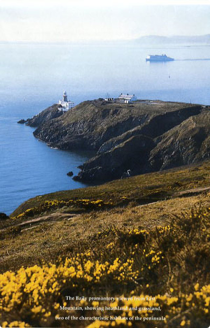 The Baily Promontory viewed from the East mountain, showing heathland and grassland, two of the characteristic habitats of the peninsula.

The Baily Promontory viewed from the East mountain, showing heathland and grassland, two of the characteristic habitats of the peninsula.

The heathlands and coastline of the Howth Peninsula have been a playground for generations of Dubliners. In 1999 Fingal County Council recognised the importance of the area by designating a large part of it as a Special Amenity Area. There is exceptional countryside all around Dublin but nowhere else is so accessible. For instance, it is a less than a 30 minute journey on the DART from the city centre to Howth village.
á

A hundred years ago the Great Northern Railway (GNR) developed a cliff walk and opened a tram service to the Summit, a high point at the eastern end of the peninsula 2. The GNR's marketing slogan, The Hill of Howth for Health and Heather is as appropriate today as it was a century ago. Hotels and private clubs such as the Howth and Sutton Golf Clubs and the Howth Yacht Club have developed to exploit the natural advantages of the area but Howth remains a place that can be enjoyed by everyone.
á

Although most of the land of the peninsula is in private ownership there is extensive network of public rights of way. Irelands Eye the small island lying north of Howth harbour can be reached by motor boats from the East Pier during the summer months.

Next - The Landscape of Howth